There is no treat quite like a cupcake.  Pretty to look at, small enough to shove down in one fell swoop, and evoker of all good childhood memories; what more could you ask for in a dessert?  This little treasure makes it so easy to get woozy off the scent and high off the sugar...just one after another after another AND somehow, there is no guilt involved~
The best place in Chicago for homemade, super-moist cupcakes is Sweet Mandy B's.  I have tried almost all other bakeries around and none even compare to her delicate rendition.  My fave is the vanilla but chocolate is an easy fill-in when needed! 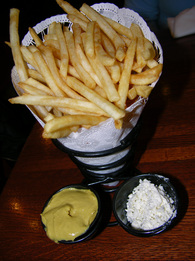 If I were stranded on a desert island and I could only have ONE food for the rest of eternity, BUT I could have it cooked any way that I wanted, I'd have to choose the humble potato.
It's just such a magical little root vegetable; though everyone freaks out and says they are never eating carbs again, I've never been one to shriek such an atrocity, especially against  the sweet, happy, stoic potato.
Imagine, you can have the potato roasted with rosemary, mashed with heavy cream and gobs of butter, baked with thick dollops of sour cream and cracked black pepper, or shredded and fried, diner style.  Or how 'bout in big fat crispy wedges with icy cold ketchup, sliver thin & layered with creamy gruyere cheese, like a gratin,  maybe a potato cake with applesauce, chilled in a potato leek soup, or you can even turn the damn thing into a big pan of bread.  Just a brilliant food and every single way it's prepared is delicious.
The ultimate, though is of course, fried.  French Fries.  That's really all I need to say.  I recently found them at Artopolis (an awesome Greek restaurant in Greektown) served crispy fried, perfectly salted and flanked by little pots of Dijon mustard and tangy feta cheese.  Just dunk, double dunk and you've reached potato nirvana.

Cooking My Way Through Saveur Magazine 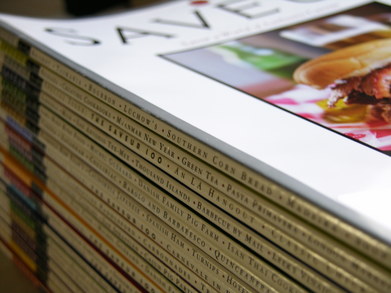 Winter is definitely here and the only reprieve that I can consolidate my blues with is a fanatical cooking spree.  I've gathered up all my past 3-4 years of Saveur magazine (the best food  magazine out there, bar none) and I'm gonna pluck them from the stack one at a time, and just cook myself silly.  I'm longing for comfort food and this is the solution, for now.  The first magazine I've pulled is November 2004.  The recipes I've chosen to rock out are:

Documentation is forthcoming; I can't wait~