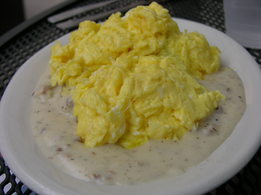 Breakfast was always the highlight of my soap opera-fueled days as a kid. My grandmother and granddad would whip up fluffy scrambled eggs, homemade biscuits (with mountains of molasses and butter), sausage and black pepper gravy, juicy sliced tomatoes, vats of greasy bacon, creamed style corn, fried potatoes with onion and fresh orange juice every single day of the week. The smells penetrating through our house at 6 a.m. were enough to make me bellow out of bed and race to the kitchen, wide-eyed and bushytailed, ready to crack an egg or pour some juice (really, just to eat some raw potato with a shake of salt).

These days, I usually delight in a bit of crunchy granola with Greek yogurt (Fage is king) and fresh berries or nice bowl of steel cut oatmeal with brown sugar (the version at Victory's Banner rocks) and I can't even imagine stuffing down that sort of monstrosity of a meal at 8 a.m. Well I guess I could. Actually, I guess I do pretty often. But in the city I've found that breakfasts are more roadside dinery or upscale stacked than plain ol', damn good Southern comfort food.

Leave it to a bar to change that and bring me straight back to my roots. The Four Moon Tavern (long known as an actors' after-hours hangout) is the perfect neighborhood bar, complete with a super-cute outdoor patio, candlelit bar tables, a pool table, a great jukebox and a breezy vibe that's cozy and intimate. All that plus they have some awesome handcut French fries with homemade ranch and let's face facts, that's all you really need in a bar. (I could do an entire book on my quest for the best homemade ranch).

Back to breakfast, though. Who knew a dark bar would be dishing up the yellowiest, fluffiest, cream cheese-filled scrambled eggs I've had since the South (Four Moon Scramble $7.50)? And who'd have thought it would come up with perfectly chopped little potatoes with a sprinkle of rosemary and thick English muffins covered in melting butter to go along side the pile of eggs? For a bar, that's the big time.

But the breakfast that's closer to my heart is a compact dish called the Harold ($6.75). It's named after a fella that one of the partners knew (from back home in Macomb) and every night at the local Denny's, he'd request that his eggs be placed on top of his biscuits and gravy. This brilliant little concoction has moved north and translated into a couple of flaky, homemade biscuits smothered in creamy white gravy (loaded with crumbles of sausage), topped off with eggs any-way-you-like. That's heaven any way you look at it.

THE FINAL RAVE: Who needs two biscuits when for about a dollar more, you can have a double order of the Harold? Just tryin' to keep it real like the South does.

Read It: Breakfast Club
Get a copy of the paper and kick back at this hidden breakfast gem. You'll find it by the bright rose awning and the undercover cop cars lining the side streets; those boys love good diner food and a bit of scandalous gossip. Really, who doesn't?

Eat It: Riverside Deli
It's a pricier brunch buffet ($12.95), but the homemade selections are enormous and manage to take over two full rooms in the back. Wear loose pants.

Drink It: Rockwell's Neighborhood Grill
This adorable bar offers one of the best brunch buffet deals around ($8.50) and a good variety of refreshing frozen mugged beer. Watch your feet for the chocolate milk mustached kiddies, though; they're runnin' wild.

Get Crazy With It: Bonaroo 2005
That magical music festival is just around the corner, so hop in your car and haul ass down South (Manchester, TN) where the real grub is. If you can't make it there, head to the 'burbs for the next best thing: Cracker Barrel. 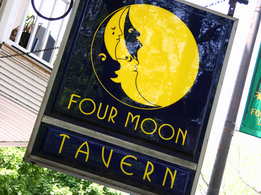 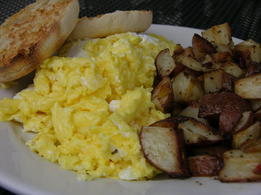