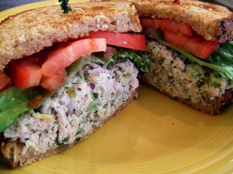 After a recent trip to New Orleans (where I had one of the best tuna fish sandwiches ever created), I blazed back into the city with a full-blown tuna fish addiction. I've been hunting high and low for the best tuna in the city, and after sampling what seems like hundreds of versions, I'm thinking that Su Van's is pretty dang high up on the list. And, lucky for me, so are her home-style baked goods, super fresh veggie paninis and thick and glorious hot chocolate.

Though I live in the 'hood, I never gave Su Van's too much thought 'til I got a new office space a half block away. Maybe it's the less-than-obvious name, or perhaps it's the eerie quietness inside (seriously, even when the restaurant is half full there's barely a peep coming out of a soul), but whatever the case may be, there was always something a bit off about the place. Now that I'm always scouring the area for new eating options, I've changed my silly ways; I actually relish in the quiet (my office seems to be production central for every other rogue indie filmmaker in Chicago) of Su Van's and I guess I don't even mind the name (I don't discount my favorite breakfast haunt, Victory's Banner, because I don't know what the hell a Victory's Banner is, do I?).

hat said, I now troll through the front doors of Su Van's several times a week and dig into huge tuna fish sandwiches (loaded with tiny bits of onion and celery, gobs of mayo and sweet relish on a multigrain bread, with lettuce and tomato) and insanely fresh-from-the-garden vegetable paninis.

Usually I'm a stickler for vegetables (chunks of vegetables and severely long strips of zucchini freak me out), but these guys cut the veggies (zucchini, tomato, Vidalia onions and spinach) to order, it seems, and they're just so clean and un-olive-oil soaked that each wedge of the grilled sandwich (there are three total…yet another delightful surprise) is packed with actual vegetable flavor. There also happens to be some serious slathers of hummus and a rockin' feta dill spread involved, which I think brings out the entire veggie flavor triple-fold. Each of these comes served with chunky potato salad (my fave), a simple pasta salad, fruit or chips.

After downing one of these monsters, I attempt to steer clear of the cakes, cookies and pies (always a severe struggle) and drown myself in a homemade, melt-the-chocolate-upon-ordering hot chocolate. A gigantic cup of cocoa comes tumbling out covered in puffs of yet another one of my addictions, whipped cream. I don't care how hot it is outside (100 degrees and counting), I consider hot chocolate to always be in season and it should be available at all times (no matter what the menu says).

The Final Rave: Come to find out, I guess the name is a simple meld together of the owners' names (Susan and Vanessa). Simple enough. Still though; it's so '80s, and not quite the mystery I wanted it to be.

Read It:  Chowhound.com
There are millions of entries, but if you scroll down far enough, you might just happen upon someone else's obsession with tuna fish (or hot dogs or tea or soft shell crab). Prepare on spending a full day on this project; this site is quite a who-cares-about-work instigator.

Drink It: Trader Joe's (Lakeview)
This past weekend, the chica running the freebie sample booth at TJ's had created this insanely delish concoction of spinach dip mixed with a can of TJ's tuna and then smeared it on sunflower bread (with a side of blueberry juice). Just freakin' delightful…those TJ's employees are really special people.

Eat It: Whole Foods
They have two versions of tuna (one with cranberries and one with olives) in the deli. Both are free to taste and both are totally delicious. Plus, if you order a pre-made sandwich, it's only $3.99. That's unheard of for Whole Foods, yeah? Usually there's a mortgage (or a limb) involved just to get a sack of groceries.

Get Crazy With It: Sweet Olive Cafe, New Orleans
This was the ultimate tuna sandwich (non-fishy yellow fin, full of mayo, easily a half pound per sandwich) and you only have to roll to New Orleans to try it. Not bad…at least it ain't London. Plus, who knew you could order your cocktails TO GO. Brilliant.

Try the tuna at Neiman Marcus. They have a little cafe on the 4th (?) floor and have absolutely delicious food, but their tuna is exceptional.