Late last night, I returned from my own personal farewell to Los Angeles trip. I’d gone out there to sell my sailboat and needed to wrap her up and get her ready for her new owner and while I was there, I revisited some of my favorite haunts and memories in LA (without the allure of a sailboat, who knows when the hell I’ll be back to that shady town). Along the way, I stopped at numerous holes-in-the-wall to fuel my goodbye and happily discovered that Chicago wins out in the back-alley dining department, as well. (After a decade long love affair between the two cities, a solid winner has finally emerged.) 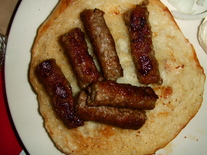 On the food front, I was stunned to realize that my neighborhood sushi joint, Kaze, blows LA sushi houses away and that the Chicago Diner rocks the best health nut chopped salad from either coast. Good ‘ole Wholly Frijoles owns the market for Mexican (though Tijuana on Olympic near the 405 is a close second) and I was delighted to discover that my charming little Cafe Effe (on Montrose) still has the most jaw-dropping tuna I’ve come across. And I’m comparing their version to the million-dollar plate that the Pacific Palisades Beach Club serves up. Yep, Chicago wins all the way around.

My happiest revelation came when I sat eating breakfast at Ruby’s, a 1950s-style diner by the marina and recalled one of my last nights in Chicago before I’d left. I was trolling up and down Western Ave. looking for a someplace good to eat and noticed a cute, neighborhood-looking bar called Memories Inn Tavern. It looked suspiciously like any hoodie you’d find in Lincoln Park (save for the blacked out windows), but I was starving and decided to give it a go.  Prepared for frat boy fun, I blazed through the front door and was instantly greeted by the likes of a raucous, foot-stomping Serbian dinner house. The lovely waitress’ (who spoke no English whatsoever) were in the midst of serving dinner and drinks to the rowdy Serbs and the dressed-to-the-nines house band were busy prepping their instruments.
After quickly grabbing a table off the main floor (this is the best view in the house), I ordered a few random standbys from the menu (think meat, meat and more meat) and settled in to watch the action unfold. Big Kamikaze shots were flowing freely from the bar, hands were being waved in the air (a few folks got up to dance right at their table) along with the singer’s rendition of a popular Serbian love song and the scent of charred meat was wafting from the kitchen.
When my house-made chevapi (Serbian sausage) and grilled lamb kebobs arrived (I’m usually not into meat, but when in Rome), I was stunned to taste some of the best food I’ve had in months. The chevapi was so perfectly juicy and came situated on these crumpet-like slabs of bread, which had soaked in most of their delicious oil. They’re served with a big, fat dollop of super-thick sour cream and sliced onions and the key is to tear of a hunk of bread, slather it with the cream, stuff it with onions and a couple of little sausages and then make a small little folded sandwich out of the bread. The tender lamb kebabs were blistered golden and beautifully done. I’d ordered a platter of mashed potatoes and some white vinegar cabbage salad on the side and both dishes blew away most other renditions I’ve had in the city. See, that’s what I’m talking about. In Chicago, you can just wander into any ole place and immediately be taken to a whole other country without leaving (or wanting to leave) Western Ave. whereas in LA, you’re always one tiny mai tai away from actually buying the damn ticket and getting the hell out of dodge. Forever. Later, LA.

THE FINAL RAVE: No matter how full you are, do not let the one-and-only dessert they have slip past you. Imagine crispy crepe-like pancakes, rolled up and loaded with rich, chocolate mousse, covered with more creamy milk chocolate and then sprinkled with white chocolate shavings.

KEEP IT GOING:
READ IT:  Nationmaster.com (http://www.nationmaster.com/encyclopedia/Chicago-Illinois)
Read all about Chicago stats on this encyclopedia like website.  Betcha didn’t know that Chicago has the second largest Serbian population outside of Belgrade. Why are these Serbian restaurants so few and far between, then?

DRINK IT:  Serbian Village Restaurant
I’ve been told that this place is a little more tourist friendly and serves a slightly Americanized version of Serbian favorites. I don’t know if I believe that one, as the Serbs I’ve encountered seem to be swayed by nothing and no one. Especially when the flaming shots are a rollin’.

EAT IT:  Café Effe
This discreet eatery on Montrose has the cities second best chevapi. I mean, you just cannot beat a $7 plate of juicy meat served on thick, homemade bread that easily serves three.

GET CRAZY WITH IT:  Skadarlija Restaurant
They serve great food and barrels of liquor and after a bit of both, the balls-out dancing begins. For this one, though, you’ll have to live like the Europeans do and start late; the doors don’t open ‘til 8:30 pm.