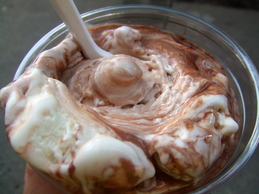 A few months ago, my film crew and I set out on an epic road trip from Chicago to the very tip of Baja, Mexico. We were filming a TV show called, "Tracking Expats," traipsing up and down the entire peninsula of Baja trying to locate those randy souls that took the plunge, ditched America and bolted over the border. All in all, we logged over 7,000 miles roundtrip (in my trusty SUV), close to a hundred plates of beans and rice and boatloads of margaritas.

On the way there (across the whole of North America), we stopped at almost every single Dairy Queen (lovingly called the DQ) and picked up a few of those mind-numbingly addictive Blizzards. My fave is the Snickers Blizzard, and when we finally crossed back over the border onto US soil, where'd we roll to right away? Our good friend, the DQ.

ince that trip, I've tried to stay away from the DQ, and I've have done quite well (until the big mama one on Southport opened and all hell broke loose), but that doesn't mean that I don't daydream about my thick, gooey, best bud, the Snickers Blizzard. When I moved into my new office space in Lakeview, guess what was located right on the corner? No, not DQ, but the next best (if not better) thing, Scooter's.

This little ice cream haven is home to the blasted stone-cold treat called the Concrete. Can you imagine? An insanely dense cup (four scoops to be exact) of vanilla custard (this creamy stuff blows ice cream away) mixed with blops of crushed Snickers and chocolate sauce. The caramel is almost frozen solid, but the minute you put it in your mouth, it melts immediately and finds its home straight down the pipes to your stunned belly. Even the kiddies know what's up with this place. The other day, I saw a wee one obliterate a mini-ice cream cone in thirty seconds flat (much like a giraffe eating tall weeds, all you saw was lips and teeth in nonstop movement 'til that baby was gone. She never looked up once).

The other blended concoction that I've been raving about to everyone I meet is the Mate Smoo Tea from Argo Tea. I head into this sun-filled teashop on Armitage Avenue and order up a cup of this stuff when I really need an intense (and quick) pick me up. And get this: The sugar-free version rocks. It's still sweet enough, clean enough and tasty enough to fill the deafening sweet tooth void, without all the sugar crash madness that the Concrete causes (that is a nothing but a belly full of mayhem). All of the teaophytes are going nuts over these new drink offerings (really, who can stand another Mocha Frapp?) and even though the prices are outrageous (I paid $20 bones for a bag of loose-leaf mate; hey, this is superior tea, though), it's such a pure and clever spin on the "health drink," you can't help but dole out the dough.

The final rave: These are the very last of the dog days of summer and I'm all about the liquids, in any shape, way, form or fashion. That said, the new Vosges Chocolate across from Argo Tea has some lovely samples. Snatch them all when no one's looking.

Read it: Nine Muses
The menu at this Greektown favorite is full of delicious Greek dishes, but I go there for the insanely potent frappe. Try to ignore the techno vibe and focus on the french fries. Served alongside a frappe, very soothing feelings abound.

Drink it: Mario's Italian Lemonade
The season's almost over, so jam to this Little Italy joint to get a slushy glass of Italian Lemonade. If it has pina colada, roll with that one; you'll think you're in the Caribbean.

Get crazy with it: La Taberna Tapatia
If you really want sweet, you might as well toss a bit of liquor in there. This Mexican cutie has the best patio out back where you can enjoy a super-fly, minty mojito. A couple of these monkeys and you're toast. See ya summer!