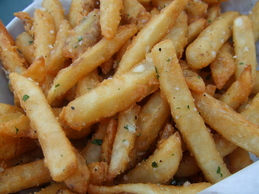 Sometimes the only thing that's gonna hit the spot is straight up bar food and lots of it. Problem is, where to wrangle up some good bar food? I know there are a few spots in my 'hood; The Village Tap (awesome veggie burgers and plates of made-from-scratch hummus), The Burgundy Inn (juicy pork chops and addictive yeast rolls) and Northside Bar and Grill (great, drinkable ranch dressing and crispy French fries), but for the most part, the late night shove-down is cheesy quesadillas and refried bean dip from Tony's Burrito Mex.

That is, until I discovered Candlelite Chicago way up on the North Side. This tavern has been around for 60 years (never heard of it) and had started to sag ("big time," according to the regulars) until a group of young bucks bought her a few years ago and did a full retweak of the interior, including the menu. This is bar food at its finest. I could go on and on about the cracker thin crust pizza (which everyone who knows about the place seems to do already), or the creamy baked goat cheese marina dip with homemade crispy flatbread, but compared to a few other stars on the menu, these dishes pale in comparison (though they are quite good).

What's really worth the trek all the way up (besides chillin' al fresco on a particularly loud stretch of Western Avenue) north is the big basket of garlic French fries. I've never had fries served doused in real chopped garlic and tiny bits of bright green parsley. They take the sized-just-right fries, coat them and then fry them 'til they're perfectly crispy (they sorta have the beer-battered shell of a good onion ring) and then toss on a big handful of fresh garlic and a wad of chopped parsley. Talk about a taste sensation; that basket was gone in about two minutes flat. And, as soon as the ranch dressing made it's way to the table (on a surprisingly crisp house salad), the few stragglers disappeared, too.

Another gone-in-a-flash dish was the skillet chocolate chip cookie with vanilla ice. Now, I'm really picky about my desserts (they really must be homemade or my tastebuds freak out), but they way they've done this one up is along the lines of legendary. Imagine a mini cast iron skillet filled with smoking hot chocolate chip cookie (pre-made cookie dough, but who cares) and then layered with three big scoops of vanilla ice cream, caramel sauce, chocolate sauce and a final twirl of whipped cream. This cheeky offering was gone in less than 30 seconds. Word to the wise: Trouble starts a brewin' come the last bite.

The Final Rave: The crispy shrimp roll is pretty dang good, too. But the smart thing to do is lose the bun and just roll with the extra-fat, juicy shrimps. They've been coated in panko (that ever-delicious Japanese breadcrumb) and when you dip them in the horseradish mayo, look out.

Read it: Tuman's Alcohol Abuse Center
This Ukrainian Village hot spot houses one thing and one thing only: hard-core drinkers that like to come early, stay long and drink cheap. Skip reading anything except your bar tap at the end of a 12-hour drinking session. How the hell is it still under $20 bucks?

Drink it: Hugo's Frog Bar
Though a little pricey, this always-packed joint serves up some of the best fried seafood in the city. Wash it all down with an icy cocktail, but careful the roving hands; much like the frog legs, they seem to be jumping around everywhere.

Eat it: Andalucia
Considered bar food in Spain (how'd we miss that boat?), small plates rule at this tiny tapas bar. The garlic potatoes are delightful and so is the BYOB policy. Come early, though; the crows get out of control at about 7 p.m. on the dot.

Get crazy with it: Coq D'or
In the basement of The Drake Hotel lies this swanky bar/restaurant. Even though you'll drop a small fortune, it's worth it for a blistering bowl of clam chowder and a couple of its award- winning martinis. If you have enough of them, you could make like Vince Vaughn and crash one of the dozens of weddings that seem to take place here on a nightly basis. Good times. 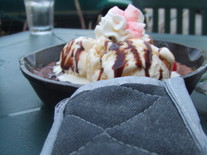