Nelly's Saloon: Romanian to the Core 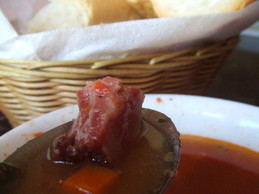 As it's proved to me every other day, there are pockets of Chicago I'm completely unaware of. Just when I think I've hit every hole-in-the-wall eatery, up pops another one (of course when I ask the owner, "Now, how long have you been here?" they're always like, "Twenty years").
How is that possible, I wonder, because I roll down this street three times a week, and surely I'd have noticed your sign, you know? I guess I don't pay as much attention to my surroundings as I think I do (just gazing into space as I'm flying down alleys and side streets).

This weekend, I happened upon what will surely become one of my new favorite Sunday hangouts, a funky little Romanian restaurant called Nelly's Saloon. It's tucked on a discreet corner on Elston Avenue (the best criss-crossing street in the city), and from the outside, looks to be a nice, family sort of establishment. Well, when we scooted through the front door, the place was packed with young Romanian cutie-pies, all face-forward screaming at the big screen TVs on the wall. Cut to: Upon our entry, a full turnaround, long stare, total body checkout and whip back around to yell some more at the soccer game that was blaring out of the TV. Yah, I'm gonna go ahead and just take a seat at the bar. (Who could parade across that scene to try to locate a table?)

Turns out, that's the best seat in the house, with drink samples (the blended amaretto stone sour was achingly delicious…isn't that a wedding cocktail?) somehow making their way from the noisy blender to directly in front of my perch. With those keep-'em-coming samples and a $4 glass of the house white wine, I had a perfect view of the chaos, without having to be swallowed by it.

The menu was small, written in Romanian (with helpful English translations) and mostly meat-based. Being one to always create a quasi-vegetarian sampler platter, I ordered the Romanian sauerkraut, a bowl of navy bean soup with smoked pork shank, and an eggplant salad. When the non-English speaking waitress plunked down all three bowls at once, nothing was quite what I expected (I'm diggin' that, though). And, after the first sample of each dish, I thought, "I definitely gotta get to Romania."

The soup was the most simplistic of the three, but still hearty (big chunks of fat-flavored pork were floating throughout) and filling. Tiny bits of carrots, onions and beans were engulfed in a tomato broth and after a rip of springy bread made it way into the bowl to sop up all the juices, it literally dissolved when it hit my tongue. The sauerkraut (which I naively assumed would be sour) was, in a word, awesome. It was a perfect mix of blanched cabbage, light vinegar and had a faint sprinkle of sweetness laced throughout; a perfect little house salad.

My favorite of all, though, was the eggplant salad. Not really a salad, but more of a dip, I'm sure it was meant to be spread across hunks of bread, but I just took the spoon and straight shoved it down, sans accoutrements. Barely smoky and each bite creamier than the next, it was a treasure trove of blended eggplant, crunches of onion, and sweet cream.

Why would I love this place so much, you ask? It's completely off-the-grid, it's packed silly with delighted locals, there's live Romanian folk music on the weekends and the passionate crowd ain't gabbing about Britney's baby or Renee's divorce. All that, plus those amaretto stone sours…just a Sunday made in heaven for the likes of me.

The Final Rave: Though I didn't partake, the homemade French fries looked fantastic (I almost pulled the full snatch when a little girl with fries sitting next to me turned her head to chat with her buddy). More importantly, though, what up with all of the expensive black cars out back...a bit of shady business could be rockin' in this one.

Read it: The Online Romanian Cookbook
All those great dishes I'm raving about are broken down and made into recipes in this online version of a Romanian cookbook. I'm must make the eggplant salad, I just can't believe it's as easy as that. We'll see.

Eat it: Bucovina
The thick polenta is smothered in cheese, the sausage is charred, yet juicy and the price is right. Just plain 'ole good stuff.

Drink it: Via La Scala
Though it sounds Italian (and it is), there is a small Romanian menu at the bar. The sweetbreads are reportedly, "as fine as they come."

Get crazy with it: The Romania Virtual Tour
Just in case you can't make it over to Romania this fall, this is a pretty cool little site, where you can click on a city within the map of Romania and see pictures of the villages. It's almost as good as being there.

Nice review! Glad to see you back on track with what's really
important...FOOD! HAHA