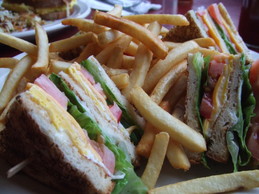 I know it may sound horrifying, but one of the very best thing that I've put into my mouth is the self-created fried egg club sandwich at Salt & Pepper on Lincoln Ave.  Yeah, the waitress was a bit stunned that I didn't want meat on my club and would rather have a fried egg in its place, and then to toss on some extra mayo to boot.  Who cares though, when you're a veggie (yeah....) ya gotta do whatcha gotta do.  I know this looks like a heaping platter of food, but I did indeed mow on the entire plate---all french fries included.  Salt & Pepper also has an amazing scrambled egg on grilled rye bread with oozing American cheese, but that is a whole other story!