Home Archives Profile Subscribe
The Field Museum: An Around-the-World Adventure
To the Market We Go 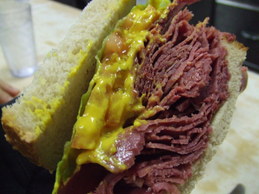 You've probably blown past it a hundred times. The dirty exterior of Moon's Sandwich Shop, 16 S. Western Ave., isn't the prettiest thing to look at, with chipped metal gates splayed across the front and a grimy sign that's barely readable. It may look like it closed for good in 1985, but this is one book you don't want to judge by its cover.
Moon's is one of the best diners in Chicago, hands down. Usually packed to the brim with saucy characters, it's a bona fide chop shop in a city full of dinky imposters. I stumbled across this mecca of all things greasy and delicious some time last year in one of my infamous blaze-about-the-city-and-see-what-I-find foraging trips.

After I spotted the place, I pulled over and watched the front door intently as patrons plowed in and out by the minute. Not wasting too much time, I jammed into the tiny building to see what the heck was being served up. Let's just say I'm now a regular of epic proportions, one that always leaves with a stomachache from eating far beyond what's humanly normal.

I constantly daydream about the meatloaf sandwich ($4.25). I know it sounds simple, but until you've held a perfectly cooked slice of homemade meatloaf sandwiched between two achingly soft pieces of white bread that ooze American cheese and dribbles of extra mayo, you haven't truly lived.

But I don't necessarily order it all the time. Instead, I flip out on the carbs and go for two eggs over easy, grits and a perfectly executed stack of pancakes. Another plain sounding dish, but one that's been destroyed many a time at sub-par establishments. Moon's does the tiny details right: Fat chunks of butter are slipped between each flapjack, so when you lift one to toss in your own, Moon's thoughtfulness has already soaked into the pancake.

Another winner is the mustard-laden corned beef sandwich ($5.88). All of the meat is cut-to-order in front of your eyes (you can watch the griddle from pretty much every stool in the joint), tender, thinly sliced corned beef piled mile-high on a couple slices of white rye bread and topped with crisp lettuce, thick tomatoes, peppery mustard and homemade pickles.

You get the feeling that the majority of the eccentric clientele come from the wrong side of the tracks, but sharing the newspaper or filling your neighbor's water glass from the pitchers on the counter is commonplace here, making that book's cover look even better.

The Final Rave: There used to be a free parking lot next door and it was recently bought up for more condos. Great, there goes the neighborhood.

Read it: Manny's Coffee Shop & Deli
The menu is long and so it the wait. Though the food is well worth it, all I'm gonna say is that Moon's trumps Manny in the corn beef department. Sorry.

Drink it: Glenn's Diner
Some call it a fish-shop, some call it a homey breakfast haven. Either way you'll find a sunny, never-too-busy eating-house that has mastered diner food. Plus, you can BYOB morning, noon and night.

Eat it: Salt & Pepper Diner (Clark)
With several outposts in the city, this diner does it up right. The only item not really worth revisiting is the so-so French toast, but except for that, everything else is a champ.

Get crazy with it: Moody's Diner
I found this iconic diner on one of my food-hunting jaunts (I'd somehow ended up in Maine) and I've still not found a coconut cream pie that beats Moody's. Don't think I wouldn't drive straight back there for it; when you've got the goods, you've got the goods.