To the Market We Go 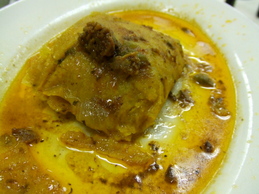 Here's a recent article I did for centerstage.  While researching, I discovered some of the best treats in the city in little neighborhood grocery stores....My favorite?  Grandma's Chinese Spare Ribs in the back of the Thai Grocery.  I almost died when I tasted them~

There's nothing worse than having a bone-empty refrigerator with barren cupboards to match. All take out gets you is one semi-hot meal; straggling to the grocery store leaves you with a bunch of stuff you have to actually cook; and all eating out gets you is one super-stuffed belly and an empty wallet. So go smart and keep a roster of ethnic grocery stores that house restaurants churning out hot food in the back. While you pick up a jar of jam, someone is whipping you up a batch of Swedish pancakes with lingonberries. Or while you decide between laundry detergents, a Cuban sandwich is being lovingly pressed for you to enjoy on site. With groceries and a hot meal, how could these not be a win-win deal?

Load up on Cuban eats at La Unica
I've never met a tamale I didn't love, and this Cuban cafeteria in the back of a full-service grocery store whips 'em out with the best of them. The firm, Cuban-style tamale (99 cents) is stuffed with tender bits of pork and soft green peppers, and comes covered in rich pork drippings. Grab some creamed ham croquettes, yucca covered in garlicky mojo and beef-stuffed empanadas and take a seat at one of the dozen or so tables. You'll also find yourself knee deep in homemade ox tail, smoked pork loin, beef tongue and stewed turkey leg. Just make sure to save room for some of the wildly sweet flan; it's a real steal at $1.49 per piece.

And more Cuban still at Tropi Cuba Restaurant & Grocery
You've really stumbled off the beaten path when you amble into this bare-bones grocery and counter-only chop shop. But the trip is worth it if only for the thin-as-paper French fries that come packed alongside a fantastic Cuban sandwich ($2.99), a crunchy French bread delight pressed to capacity and jammed with juicy ham and roast pork, pickles, mayo, mustard, lettuce and tomato. The hot box near the cash register offers deep-fried dollar items like pizza puffs, chewy empanadas, hunks of fried chicken, shredded pork and papa rellena (a potato ball with ground beef). Nothing on the mostly Cuban menu costs more than $6, including a big platter of fried pork ribs, served with black beans and rice.

Discover an Asian bazaar at Thai Grocery
Jammed into the back of this tiny Thai grocery store is an old-school kitchen that pumps out some of the most delicious take-away food we've tasted. Though there are no tables, you'll be hard-pressed to make it out the door before you devour a basket of grandma's sweet fried spare ribs ($5.95 per pound) and dozens of Thai-fried bananas ($4.50 per pound). While your whole tilapia fish is being fried ($6.95 each) make sure to browse through the crammed racks of bamboo steamers and shelves packed with containers of pure palm sugar. There are several coolers of fish on ice, but it's the piping hot sour curry with shrimp, bitter melon and pork ribs that keeps our mouths drooling.

Find gourmet treats at the Scandinavian Wikstrom's Gourmet Foods
Dozens upon dozens of varieties chocolate litter Wikstrom's shelves, and with a few cups of the free coffee (what a lovely discovery!), this Scandinavian deli and grocery store is a sweet tooth's paradise. But don't discount the hot food: Take a seat at one of four tables and try a plate of the sweet Swedish pancakes with homemade lingonbery sauce ($2.99) or go all-out with an order of the juicy meatballs, mashed potatoes and gravy ($3.99). With made-to-order sandwiches and cold salads for sale by the pound, and you could easily turn your trip into a picnic smorgasbord. Don't forget to pick up a big package of Norwegian smoked salmon to go; it's some of the best in town.

Get your taco fill at Guanajuato #3
This popular Mexican grocery pops up all over the city, and until you've had one of its carne asada tacos, you haven't lived. Loaded with juicy nuggets of charred meat, chopped onion and fresh cilantro, a squirt of crema and salsa takes them to the next level. You can easily make a meal out an order of two ($1.75 each). The 15-stool restaurant also serves up made-to-order tortas, burritos, tacos and bowls of menudo. Throwing caution (and heart problems) to the wind, the kitchen fries up gigantic pieces of pork skin and, thankfully, there is an even bigger vat of cinnamony horchata (rice milk) to wash it all down with.

Get into Italian at Miceli's Deli
Down in the heart of Little Village, this Italian grocery store and buffet suits the shopper in need of basic goods like Tide and Charmin. But make sure you claim a table before shopping for ladyfingers and 50-cent bags of pumpkinseeds, because regulars pack the place at lunchtime for the daily hot specials like pepper and egg sandwiches. The fans rave about the fat links of Italian sausage with peppers, potatoes and onions ($5.95), but the BBQ chicken and slabs of meatloaf fare just as well. Everything is prepared in-house, and just in case you can't eat on site, many of the items (stuffed gnocchi, raviolis and gravy) are sold in the frozen foods section.