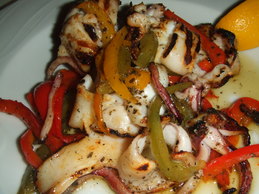 I've always known that Chicago is totally different from Los Angeles. There's the weather, the traffic, the ocean, the attitude, the architecture, the year-round farmer's markets and as my frequent dining buddy, Chezne, recently discovered, there's the BYOB policy.

In LA (where she lived most of her adult life), most restaurants have a rule: Even if they have a full bar and liquor license, you can still bring in your beloved bottle of vino for a small corkage fee. Not so in Chicago. She brazenly attempted to convince me that that policy was true here, and I watched her boldly give it a go at neighborhood favorite Anna Maria Pasteria, 4400 N. Clark St.

Oh, the shock and awe on her little nugget when she whipped out her crinkly brown bag encased bottle of her favorite fruity red and the maitre d' screwed up his face with a big ol' "Yeah, right." She didn't let it dampen her spirit, though. We just plowed right in to the packed house and quietly ordered off the in-house wine list.

Anna Maria Pasteria is the kind of place that wanna-be 'hoods in LA would kill for; classic and clean, with a twist of comfort. I'd been hearing about how good the food was for some time. We were actually headed to another Italian favorite, La Donatella di Cucina, when we noticed a parking spot right in front of Anna Maria (beat that, LA). We decided to abandon the familiar and give the untouched a go.

The smells were blisteringly effective. We crammed ourselves into a tiny corner two-top and ate ourselves silly. Starting with an insalata caprese ($8), we immediately recognized our error (tomatoes are simply not in season). I will give the kitchen mad props, though, for loading it up with the-next-best-thing to juicy summer tomatoes: sun-dried tomatoes.

There was no way I could resist the calamari alla griglia ($9.50). The charred baby squid came out tossed with bright red, green and yellow peppers (never seen that before) and specked with herbs, loads of peppery olive oil and fresh lemon. Again, kudos to the kitchen for being thousands of miles away from an ocean and managing to give me a taste of it's wild beauty in the blustery concrete jungle.

Next up was the house favorite (and, we soon discovered, our favorite): rotolo aurora ($14). Imagine two huge discs of rolled pasta stuffed with thick ricotta cheese and fresh spinach, totally smothered in a creamy tomato sauce. It's a hungry vegetarian's dream meal...and it was gone in about a minute flat. Never ones to listen to our aching stomachs, we got a bit crazy and ordered the torta de pana dessert. What we thought would be a simple slice of bread pudding with a splash of caramel turned out to be a mammoth plate loaded with three huge wedges of hyper-dense bread pudding literally bathed in warm caramel sauce and topped with a scoop of homemade hazelnut gelato. It's a good thing the car was so close.

The Final Rave: Sorry, Wishbone. Though your bread pudding has been my favorite for years, the version Anna Maria is whipping up takes the cake. I mean, the pudding.

Play it: B.B. King
I moved to LA when I was 20 and my first job was selling cigarettes at B.B. King's blues bar at Universal Studios. That hellacious job lasted about as long as he's in town playing at The House of Blues; one big, fat day. See him live on Thursday, Feb. 16.

Eat it: Rose Angelis
I'm told that the bread pudding at this off-the-beaten-path hideaway is the best in the city. That is quite a statement and one I'm just gonna have to suss out myself.

Drink it: Hazelnut Martini
Thinking of that hazelnut gelato got me thinking of liquor (what doesn't?) and fortunately for all of us, here's a handy recipe that sounds easy-as-pie.

Get crazy with it: Pasta Fresh
This tidy little store makes vats of pasta fresh every single day. If you've never tried the real deal, then you've been missing out on one of life's greatest wonders. It also sells awesome stuffed artichokes.

Hello Misty - frequent reader, first time commenter - thought I'd let you know that I referenced this one on my group's blog - no trackback on Blogger. Love your posts!
Thomas