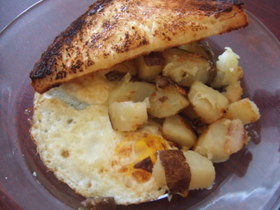 I have to admit, I couldn't wait to try the food at terragusto, the new Italian market and cafe in Roscoe Village--I've been by there a number of times since they opened about six weeks ago, and I finally rounded up a few friends and went in for b'fast this weekend.  Ummmm, yeah.....Actually, the food was pretty delicious, but the prices were just ludicrous(especially since the portions were tiny).  $9 oatmeal?  $9 french toast?  And, for my little, itty-bitty bowl of eggs, potatoes and ONLY 1/2 piece of toast (what the?), $6.50.  Just plain 'ole silly.  The potatoes were delish, though...because they were fried up in bacon fat and  magically no grease anywhere to be found.  The eggs were great, too, but the toast was cold and not buttered, as promised on the menu (these little promises matter, you know?).  I think they still have a few kinks to work out for b'fast--but, they seem to do much better at dinnertime with homemade pastas and  salty, perfumed half-chickens for the table to share (cooked in a cast iron skillet, no less).  Plus, they serve up that awesome organic carrot cake made by Maude, the permanent fixture at the Green City farmers market.  I'd say, slam the prices way down and jack the portion size way up or you just might go the way of La Bodega and eno, the two not-so-lucky restaurants in that space before ya!  We dropped almost $40 for b'fast (three people) and I left starving and needing a drink immediately (problem solved at neighboring Four Moon Tavern--which, by the way, has AWESOME brunch...with all portion sizes huge)!