Calvin's BBQ--All the good sides {From The Raving Dish} 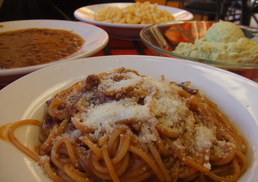 It seems that I'm forever on the hunt for hearty, fulfilling side dishes. Not much of a meat eater, my desires lean toward the simple and easy to find, like French fries. But a girl can only stomach so many platefuls of fried potatoes. There comes a time when I need some substance, a time when I crave something I can chew, as opposed to inhale. Enter Calvin's BBQ, a tiny shack of a place on the outskirts of Logan Square.

I'd heard about Calvin's from Lisa, a foodie buddy of mine. She's always on the hunt for rough-hewn places that look as if they just might be churning out good grub and she'd spotted Calvin's on a recent sojourn through the city. BBQ joints are always good for homey sides, so I decided to give it a go. Let me just say this: When the smell of smoking meat hits you before you even got out of your car, you know you're onto something (credit that wildly tempting scent to the smoker out back).

I arrived at 10:45 a.m., which is exactly fifteen minutes before it actually opens, but the jolly fella running the place popped open the door when he saw me shuffling around the parking lot and said I was welcome to come on in—he'd be happy to whip something up for me a tad early.

So I grabbed a table, checked out the offerings and proceeded to order half of the made-in-house side-dish menu: baked beans, potato salad, mac-n-cheese, and my new obsession, BBQ spaghetti. Of course, he was stunned, almost demanding that I move to a larger four-top table with more space.

The kitchen was actually in the process of boiling the pasta, so I bided my time until all of the dishes could come out at once, not even realizing that I'd ordered two full pasta dishes (that's a hangover for you). And when everything started rolling out, I got the feeling that I'd be taking a whole bunch of food to go: Every dish could easily feed two for just a couple bucks each.

The cooked-for-hours baked beans were completely slurpable, with tiny chunks of fat and specks of onion throughout, and the hulking bowl of mac-n-cheese was insanely creamy (possibly Velveeta, a childhood favorite). Usually, I'm a potato salad snob, but this version of it was spot on, with just enough mayo, a hit of mustard, crunchy bits of celery and my all-time-favorite potato salad addition, hard-boiled egg.

But, the dish I'd come back for is the BBQ spaghetti ($2.95). The pasta was cooked al dente (no small feat for a BBQ place) and was mixed with homemade BBQ sauce (slightly sweet, with a tiny kick at the end) and ribbons of tender, black-around-the-edges pulled pork. Topped with Parmesan cheese, every single twirl was a taste sensation. It was so wickedly addictive that when I reached the point when I was horrified by what I was eating, I kept on going.

My solitude alone with my food was quickly shattered. Within a few minutes after opening, the place filled with burly regulars, all claiming they knew the menu by heart. Judging by the breadth of their stomachs, I didn't doubt them.

The Final Rave: I was stuffed to the gills, but one of the saucy regulars told me on the way out that if I didn't try the homemade sweet potato fries next time, I'd be crazy. I guess I'm back on the fries again.

Read it: Garry's BBQ Pit
Anyone who wants to get into the belly of BBQ must first master a good sauce, rub, mop, or marinade. This site has recipes for all of them, as well as a handful of smokin' sides.

Drink it: Smoke Daddy
There is no better way to enjoy a mammoth plate of BBQ smothered meat than with an icy cold one and a live blues band jammin' in the background. Especially when the music is free.

Eat it: Chicago Chill and Grill
This weekend, join the chilly masses at Navy Pier as they suck down BBQ and listen to live bands. Admission is free, but remember to bring extra rolls of paper towels; BBQ is a messy business.

Get crazy with it: Song Do Korean BBQ
Though I've never tried it myself, folks rave about the intensely flavored spectrum of meats offered up at Korean BBQ joints.