Forget about Potato Chips, Have a Cassava Chip 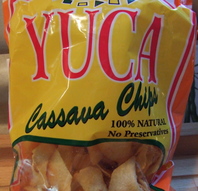 I just discovered them most delicious variation on the potato chip ever.  They're called Cassava chips (Yuca and cassava are the same thing, in case you didn't know) and they are the ultimate substitute for greasy potato chips (which I do love, but attempt to avoid if I can).  I ran across them at my new favorite market, The Fresh Market up on Kedzie and Devon (although they did not have them last time I was in). It's an international market that's super cheap and chock full of specialty items from Bulgaria, Greece, France, Morocco, Italy and the like.  Anyway, these little chips are pretty salty and slightly thicker than regular potato chips but at least they have a hit of fiber and less fat.  It doesn't mean that I won't sit and eat the entire bag, though.  Factoid for you: Yuca is a starchy root vegetable that makes the most delicious french fries (another addiction)... and also is what makes tapioca.  I'm always on the hunt for smothered yuca in garlic, too.  It's just damn good stuff.

You seem to have an instinct for adventure and exploration in you. Keep up the good work. I share the same passion, am a travel junkie and foodie; finding dives off the beaten path, where the food is good and people have character is good for the soul.

A great place to go if u have not been there before is Lao Sze Chuan in Chinatown across from the Walgreens. Great Szechuan food; should like spicy food though. Some good ones too in Pilsen for Mexican and Devon for Indian, if the cuisines appeal to you.

Thanks for the article on Paradise; was skeptical about the place but after two good reviews, will head there soon.