Milkfish: The Other White Fish 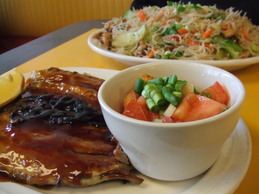 Last week, I got an email from one of my food editors suggesting that I try a great little dive of a restaurant called Jim's Grill (1429 W. Irving Park Rd.)  It used to be a chop-shop diner, but is now a mix between a diner and a Filipino/Korean joint, with a weird twist of Mexican thrown in for good measure--I credit the steak tacos on the global menu to the quiet Mexican cook.  It's really super rare for me to give fish a go in a restaurant, but for some reason, I was coerced by Joey, the friendly owner ("I'm Joey" is what he belts out to everyone who walks in the door) into trying milkfish--a light (but strong) fish that he proudly dubs "the other white fish."  The menu claimed it would be deep fried and I guess I was expecting something like tempura, but instead it came out sorta pan-fried and covered in sweet sauce (like the sauce that covers unagi).  I have to admit, it was an odd taste, but after I doused the filet in lemon and plopped it onto a mound of steamed rice, it was pretty dang good.  Apparently milkfish is along the lines of carp and catfish and had I known that, I probably wouldn't have ordered it...the best part was the fatty layer of flesh covering the top of the fish--very melt-in-your-mouth.  I will say though, after eating milkfish, noodles, fried rice, and a bizarre take on kimchi---I headed straight to Zephyr to slam down a mammoth brownie hot fudge sundae.  I needed something to get that crazy fish taste out of my mouth, you know?

i tried that place too, it is damn good