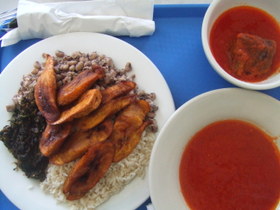 Over the past few weeks I've come across dozens of headlines about the Brangelina juggernaut taking over Africa. A few days ago, this unbelievable quote caught my eye: "If Angelina Jolie gives birth in Namibia, she would have done for our tourism sector what our tourism board budget cannot do in a year," said Namibian Ambassador to the United States Hopelong Iipinge.

Wow. So, Brad and Angie's mere presence will cause thousands to trek half way around the world to experience the wilds of Africa, but all of the intricacies of African cuisine won't. Different strokes for different folks, I guess. Do these people think they're gonna actually catch a glimpse of this golden couple? Again, wow.

For those of you who'd like a taste of Africa in your own back yard, this city is rife with opportunity. I recently made my way to B & Q Afro Root Cuisine, 4802 N. Clark St., one of Chicago's most authentic Nigerian restaurants. Plunked right across the street from a beautiful cemetery, this homegrown storefront feels like a slightly jazzed-up living room in a true African home. It's sorta like the proud homeowners came into a small sweep of cash and decided to preserve everything by covering it in plastic and adding a few final accents of fake flowers, vineyard-themed trim and a blazing green Nigerian flag.

When Lisa (my eating partner-in-crime) and I entered the dining room, we were the lone occupants of the place, probably because we strolled in exactly as the doors were unlocked (Sunday NY Times in tow). Neither of us had ever tasted Nigerian food, and we were wide-eyed with excitement for the tastebud adventure.

We grabbed a few menus from the front counter and tucked ourselves far away from the blaring suspended television. When the waitress/owner/mom-of-the-cooing-baby-in-the-kitchen sashayed over, she was chomping on a breadstick and eyeing us cautiously. I immediately asked if I could whip together a vegetarian platter off the $1-$2 sides on the back of the menu to which she just laughed and told me "No, no, no, no, no."

Apparently, you're only allowed to order those cheapie sides if you get an entrée, and since all the entrees were meat-based, I was in trouble. With a toss of her hand, she suggested that I rig an entree out of black-eyed peas, rice, efo (gnarly spinach flecked with fish) and plantains. Done and done.

We also ordered a side of beef for a few bucks, just so we could taste it. Toss in a bowl of chili pepper gravy and our feast was complete. Good Lord, it wasn't even noon yet.

After a few minutes of thumbing the paper, out comes our breakfast on a bright blue tray. I was stunned at how simple it all appeared. The peas were bone dry (was I expecting them to roll out wet-with-juices, Southern-style?) and the plantains weren't as sweet as I'm used to. But I grabbed a fork and dug right in.

I started by creating a mini picturesque volcano out of a pile of white rice, a spoonful of the red chili sauce (my volcano had exploded) and a smattering of peas (makeshift hardened lava). The first bite was absolutely delicious, but I was not prepared for the scorching after effects; it was as if my little volcano had erupted in my mouth. I jumped up and ran to the cooler to grab a couple of bottled waters and buckled down for the ride.

I usually avoid super-spicy food like the plague, but this was a different feeling all together. I actually loved the feeling of half my tastebuds searing off, and when I took a sample of Lisa's fist-sized chunk of beef, I was tempted to eat the entire mess of tender meat. It had been cooked for hours and reminded me of ropa vieja, the Cuban shredded meat dish that cooks for so long, it whittles down to "old rags." The spinach was a wonder, and there was barely a trace of fishy flavor in it. If you can brave the heat, beat it over to this hideaway, pronto.

The Final Rave: Even though I don't drink beer, this spice-factor in this BYOB joint had me jonesing for a couple of icy cold ones. The spice and the ice would be a match made in heaven.

Do it: Save Darfur
The atrocities that are happening in Sudan are outrageous and you can lend a hand by donating. This site details all you need to know to make a difference.

Eat it: Bolat
The Nigerian food here is said to be superb, and it offers vegetarian dishes galore, and throws in a taste of neighboring Ghana for good measure.

Drink it: Windy City Wine Club
Every month this vino-tasting club meets at various venues around the city and tastes its way through dozens of wines. Food is usually included, so check out the website for upcoming African taste tests.

Get crazy with it: IExplore Namibia
If you do decide to blaze over to the land of Brangelina, you could drop some dough Hollywood-style and spend seven days exploring the Skeleton Coast. You never know, you might just catch a glimpse of the Pitt clan saving the world.