Italy Rules--the World Cup and Eats {From The Raving Dish} 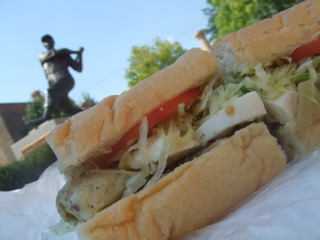 For the past month I've been working like a madwoman on a sports reality TV show out in the 'burbs called "Fan Club: Reality Baseball." We've been shadowing the minor-league Schaumburg Flyers, trying to capture a day in the life of a minor leaguer while the fans, who control the team, dream about who they want in the starting line-up. Come Wednesday the website that hosts this new show is going live. As you can imagine, the past month has been absolutely insane, all I seem to daydream about is a good, solid day off with no sports anywhere in sight. Today I came as close to the day as I could get, and it was totally blissful.

My morning started on my bike. I was up at the crack of dawn (so much for sleeping in), tossed on my backpack, met up with my Sunday-buddy Lisa and jammed over to the lake. We were on the make to get some long-absent-from-my-plate fresh fruit and veggies. But, uhh, the Green City Farmers Market is on Wednesdays and Saturdays, not Sundays. That is how delirious I am, confusing every day with the next.

After the lovely but belly-unsatisfying ride, we decided the only place to be on such a glorious day was exploring the charming 'hood of Little Italy. Lisa knew of some grandma-style apple turnovers and I was dying for a pressed Italian veggie sandwich, so we biked home, packed up her truck and took off for a slice of peaceful Taylor Street. Not only did I forget it was Sunday, I also forgot that today Italy was about to rock the World Cup. Perfect, more sports.

When we finally found a parking spot on Taylor, we immediately made our way to old-school Italian grocery Conte Di Savoia for a sandwich. The bustling deli is attached to an all-things-Italy market and has been around for more than half a century. Locals consider it the backbone of the boot in this somewhat trendy neighborhood, and I love gazing at the giant pots of fresh basil out front (why are their leaves so enormous?) and wandering the packed aisles conjuring up my next "Big Night."

We quietly stood in the short line and ordered up some simple veggie sandwiches that came packed with marinated artichokes, slivers of eggplant and thick rounds of fresh mozzarella. My smile got bigger when I had the heavy sandwich in my hands. It's wasn't even the sandwich so much as it was the fact that it was wrapped in thick white butcher paper; it makes me think of the Tuscan countryside way back in the day.

Since the shop was about to close (the World Cup was on, duh!), we made our way over the Joe DiMaggio Park (yep, more baseball) and grabbed an unoccupied bench. As we slowly unwrapped our lunch, we could hear the roar of the drunken crowds in nearby bars reach new levels as Italy began to seal the deal. Funny, the sports fanatics got frothy over a perfect kick, whereas I melted with satisfaction at the taste of an intensely marinated 'choke keeping company with chewy mozzarella.

After we ceremoniously tucked away our sandwiches, we traipsed down to Mario's Italian Lemonade, the enormously popular, 50-plus-year-old Italian ice joint. We hovered in line with the rest of the World-Cup-who? crowd and took our time ordering up several different flavors of ice (coconut, cantaloupe and cherry). Sports or no sports, Little Italy serves up the best ice in the world, and I can't think of a better way to spend a Sunday. Although come next Sunday, I'm due for a sleep in next week.

The Final Rave: I'm excited to see just how far the fans push it on this TV show. They finally get to take over the team and are the final word on who plays where and when. This could get nasty, no?

Do it: Scafuri Bakery
The best thing at this Taylor-made bakery is the apple turnovers. According to Lisa, they are identical to the ones her Italian Grandma used to make. If you're smart, you'll come early and order them by the dozen.

Drink it:Rosebud on Taylor
This dark, yet classy restaurant has a most delicious martini. Enough said.

Eat it: Al's No. 1 Italian Beef (Little Italy)
Just across the street from Mario's, this always packed haunt serves up some of the best hand cut French fries this side of the boot. And, by the way, it ships.

Get crazy with it: Fan Club: Reality Baseball
If you're a baseball nut, log in daily; you can check out the updated player content and game recaps and vote who you want to be in the starting lineup. It's as simple as that.

That veggie sandwich you described made my mouth water! One thing Italians do really well is to make amazingly simple yet very tasty sandwiches such as this. Maybe they're so appealing because the ingredients are always so fresh as well.