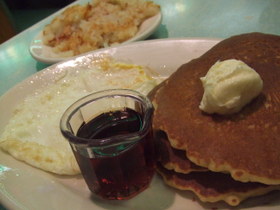 If I try, I can remember points in life when I had all the time in the world to hit up late-night diners, with absolutely no fear about waking up in the morning. I'd blaze through the Hollywood Grill every other night after having drinks at Katerina's and sit there 'til the wee hours laughing with my friends.

Times like those have changed. My schedule is rocked with atrocious deadlines, wildly sporadic hours and hellacious turnarounds. I finally had a meltdown.

I got out of work at 1 a.m. last night and had to be back by 8 a.m. I just wanted to feel like my old self again, the girl who had all the time in the world to pick and choose where she wanted to eat then sit there with plate of country-fried eggs, steaming hash browns and buttery pancakes. Not the girl with a seven-hour turnaround and a delirious mind.

Determind to get a bit of that girl back, I set out on the prowl for the perfect diner-esque environment. I flew by a couple of Golden Nuggets, paused for a split second at the Diner Grill (it was packed at 1:45 a.m.) and kept on trucking until I saw the brightly lit Golden Apple, 2971 N. Lincoln Ave.

This Greek-owned diner is quintessential Chicago. It has a late-night, anything-goes crowd and exactly the sort of greasy food to match all those liquor-soaked bodies. And any place that serves beer and wine alongside waffles just makes me happy.

After entering the dead zone (they really must do something about that lighting), I grabbed a booth facing the door and was promptly greeted by a crinkled old man about the size of a teacup. He offered up a glass of water and slowly made his way back to the counter to ring up a young girl typing away on her Blackberry.

Honey, if you only knew. I've been waiting on an offer like that all month. But my series of gaping yawns dismissed him and he wandered away to flirt with the Crackberry chick and wreak havoc on the rest of the patrons. Thank God because I could hear the sizzle of eggs and the scratch of hash browns being cut and flipped on the griddle, and in no time my taste-of-home meal arrived.

Two big runny yolk eggs, a huge pile of real potato hash browns and three springy little pancakes topped with a giant dollop of butter were presented to me along with a nice glass of white wine. Now this is the good old days, I thought. Even though my alarm would chirp like mad in a scant few hours, I just wanted to enjoy myself and take in the aromas and sensations of the late night folks. If I could just bring myself back down to the real world with a bit of breakfast and a glass of vino, I'd be fine.

So I just perched at my cozy booth ketchuping my potatoes, drowning my flapjacks in syrup and soaking them in egg yolk and watching diner life unfold. What a glorious way to spend the witching hour. Reality check? You bet.

The Final Rave: Though the food is not the best around, the zoned-out environment and cheeriness of the staff make this the perfect late night pit stop for the totally cashed.

Do it: IHOP
If you're on the make for simple, liquor-absorbing pancakes and waffles, you can do no better than this national institution.

Drink it: Clarke's Diner
All the pretty people flock to this 24-hour diner in hopes of hooking up. Who cares about eggs when there's milkshakes and cute boys around?

Eat it: Salt & Pepper Diner (Clark)
This place is one of my all time favorite diners and makes the best fried egg club sandwich around. You have to ask nicely though, as this treat isn't on the menu.

Get crazy with it: Waffle House
You have to road trip a bit to come across this bright beacon known to millions, but the whipped eggs, buttery grits and perfect waffles put the ones you get in the city to shame (for half the price, no less).