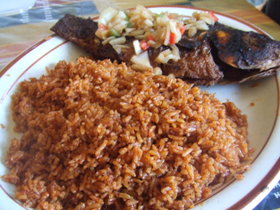 The deep South Side of Chicago is the most undiscovered food refuge in the city. It's next to impossible to tell a shack from a sure thing amid the grime and graffiti that lies one hundred blocks from the aristocratic Gold Coast. But once you discover a piece of the pie, man-oh-man...it's as if a whole new food wonderland has opened its crummy doors.

One such discovery is a totally off-the-grid eatery called Yassa, 716 E. 79th St. It's one of those joints you either stumble across in a totally random drive-about or are lucky enough to hear about in the whispered circles of in-the-know foodie societies (namely, LTHforum.com).

I was clued in about Yassa from a West African friend who told me I'd never tasted fish like the charcoal grilled tilapia and claimed its jollof rice was the tastiest he'd had since coming here from Senegal; when I hear pearls of wisdom from a true insider, there's nothing left for me to do but hit the road, and quick.

That's how Lisa and I ended up staggering down a roasting sidewalk on a particularly steamy summer afternoon. We'd driven up and down 79th Street searching for the sign, passing the storefront several times before we finally spotted it. Parking was easy-as-pie on the deserted street, and when our eyes adjusted to the dimly lit interior we were greeted with blinding smiles, chirpy hellos and floppy-armed waves. We helloed back and grabbed an oversized four top.

After sitting a spell, our elaborately dressed waitress made her way to our table, plopped down a lovely pitcher of iced water and disappeared into the kitchen. We gazed around maniacally for a couple of menus (we had traveled miles and miles, mind you) and again saw nothing but dazzling grins accompanied by kid-like giggles in the faces of the obvious regulars.

Our girl banged around for a bit while the suspended television roared on, and when we met eyes through the open window, she rolled out with a beaming look on her face, adjusting her headdress. Slowly approaching the table, she started babbling about what we needed to order. No menu, no nothing. That ain't the way it works at Yassa. You order what the chef says is good, plain and simple. She told us to order two grilled whole fish with sweet onion sauce, one with plantains and one with jollof rice. Well hell, honey, bring it on. You're the boss of the applesauce and who are we to argue?

Half an hour later, Lisa and I found ourselves elbow-deep in some of the most delicious fish I've ever put in my mouth. Imagine a whole fish that has been marinated for hours and thrown directly on coals until it was cooked to blackened perfection. The skin was crunchy and sweet while the cloudy white flesh was tender and running with juice.

We were both gape-jawed at the flavor, a wild mix of West African spices with the purity of a French-inspired hand in the kitchen. The crunchy onion chutney crowning the fish blended with the fluffy jollof rice and had just the right amount heat. And, I'm here to tell you that the plantains we consumed that day were beyond fresh. Each over-large plantain tasted as if it had just been peeled and magically caramelized in hot oil. Every bite literally blew us away.

Though I hate to expose this hideaway, secrets like this cannot be kept. Expect the hordes to arrive soon.

The Final Rave: Usually the mad dictators, we waddled out of Yassa raving that whatever the kitchen mama says we order, we order. No ifs, ands or buts.

Do it: Mexican Fine Arts Center Museum
Discover just how much Africa influenced Mexico in the past 400 years at this soon-to-end exhibit (Sept. 3). I should have known two of my favorite foods had such close ties.

Eat it: Vee Vee's African Restaurant
If you're new to African cuisine, check out this North Side mainstay on Sunday. The all-you-can-eat buffet is a deal and allows you to taste your way through the menu for 10 bucks.

See it: Lincoln Park Zoo
If you have some free time this summer, check out this ongoing passageway to Africa. Witness African wild dogs, camels, meerkats and dozens of other species on this magnificent journey.