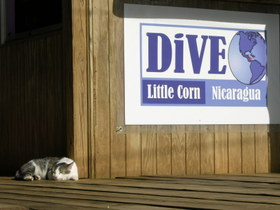 This year, I want to finally tackle all the S's.  They seem to dominate my thoughts all winter long, so I'm going to finally learn Spanish (instead of just getting by on my combat Spanish);  I need to become a much,much better sailor...especially if I want to buy a sailboat in Mexico;  I really want to learn to scuba...but not here in Chicago...I want to learn in some remote, pulsatingly hot, tropical destination--like Little Corn Island, Nicaragua (I snorkeled there about a year ago and it was amazing--though I did almost die--but, the 2nd largest barrier reef in the world is there, so you know the diving is primo); I really, really need to become a proper swimmer (not just get by on the doggie paddle, underwater and back stroke); and snorkeling...well, I just want to do much more of that.  The sea is such a glorious world and I want to explore it as much as possible.  How to begin all this?  Well, I'm thinking I will practice my ghetto Spanish on the cafe con leche maker at La Unica this morning (mas limon, por favor?) before I head down to the sailing show at Navy Pier...where I will sit in on a handful of sailing seminars and dream and scheme about my next sailboat purchase.  Dude, it's -10 degrees...what do you expect??  Yes, that is a NEGATIVE 10 degrees. Wow.