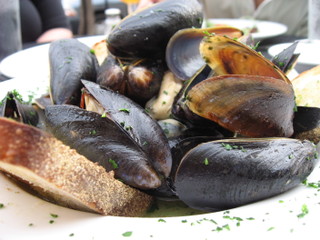 The past week, I have been on an eating frenzy.  I'm doing some research for an article I'm writing about ethnic food in Chicago and have managed to literally stuff myself silly on all sorts of deliciousness.  One of my fave dishes I've tasted in a long time are the mussels at Gruppo di Amici (on Jarvis just west of Sheridan).  Earlier in the week, I tasted the Mexican version--Mundial Cocina Mestiza--which were so-so...I credit the sub-par rating to the milky broth they were floating in; then there were the French ones at Le Bouchon, which were good, but nothing spectacular (though the salad lyonnaisse with gigantic tears of fatty bacon was); and last but not least, there were the Italian ones at Gruppo.  I mean, these guys really know how to do mussels.  They're the perfect size, all meaty and slippery, just lolling around in a super rich, wine-infused, buttery broth that just begs for a dunk of bread to to go along with it.  Which was perfect, because little toasts of bread come on the side (nobody else  served bread with the mussels).  Try sitting on the patio outside--because you can see the bright blue lake a block away and see the neighborhood change right before your very eyes.