Marigold: It's the Desserts that are GOLD~ 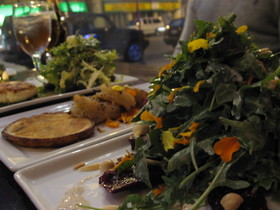 I'm not a real big fan of fancy food. I like my cuisine unfussy and simple, more peasant-style than king's platter. And, as much as I love trying new places, I'm also a big stickler for the satisfaction-guaranteed spots that I frequent without hesitation.

That said, after hearing all the hubbub about Marigold, a new Indian restaurant in Uptown, I had to give it a go. The neighborhood's been on the upswing for quite some time, but now, more than ever, we're seeing an across-the-board transition, with new condos, bookstores, coffee shops and boutiques popping up left and right. There is nothing neater than walking into an upscale Indian storefront in a shoddy 'hood and witnessing a full throttle, spice-loving audience literally stampede through the front doors and pack the tiny, candle-lit dining room tight on a Wednesday night. "On the up-and-up" is an understatement, I'd say.

When I headed to Marigold this past week with a few adventurous friends, I arrived in a ravenous state of mind. The second we sat down near the window, I plowed through the menu, calling out just about one of everything. My pals, Brad and Lisa, were delighted because they both hate to order (especially with me because I turn into a general when it comes to food).

We started with a slab of naan served up with a trio of tongue-searing chutneys. The roasted fruit and tangy mint were the surefire winners, but the onion and date concoction wasn't too shabby either. But whatever, we had just begun.

photo: Misty Tosh
I'd instructed the waitress to let our food loose from the kitchen in a steady steam and to throw out the notion of actual courses. She took it to heart, and in no time, a beautiful roasted beet salad and dahi kebab, an orange and coriander vinaigrette-dressed salad topped with gobs of pistachios and a fat slab of soft, seared cheese, jam-packed our tabletop. The grilled shrimp with ajwain (code for tastes like nothing) came out undercooked, which we didn't discover until Brad downed an entire raw one (ouch!). A cooked version quickly replaced it, but with same bland sauce, so instead we devoured the springy salads and waited anxiously on the next round to appear.

Watching the waiter juggle gigantic, heavy-as-hell plates, we stared in delight at kalongi chicken, an Amish chicken marinated in turmeric yogurt sauce (for the record, the chicken came out bone-dry, but we scarfed down the toasted almond and raisin puloa in no time) and monkfish molee, a straight-up delicious pan-roasted monkfish covered with matchstick fried leeks. But the bottom line favorite all the way around was the vegetarian thali, a quartet of India's finest veggie dishes: housemade saag paneer, chana masala, Andhra eggplant and a heaping pyramid of basmati rice. We braved the heat and turned the whole mess into a feast for all, scooping eggplant onto naan, dunking spoonfuls of masala into the mint chutney and wrestling over forkfuls of cheese (though no one would admit to that travesty).

Just when we thought we'd had enough and felt literally sick to the core, my raging sweet tooth reared its head I delighted the table with an order of the most satisfying rice pudding, toothache-throbbing kulfi (pistachio ice cream) and a decadent chocolate terrine.

Though my aching belly would beg to differ, it pays to be the king of the menu.

The Final Rave: Though we would return time and time again for the dang good dessert, we'll keep on trucking back to Babhi's Kitchen for budget-friendly Indian food.

Read It: Eat, Pray, Love
One spunky gal takes a year off and eats in Italy, prays in India and falls in love in Bali. This read-in-an-all-nighter is being made into a movie starring Julia Roberts. Yep! Some folks have all the luck.

Do It: Marigold
On April 29, a slew of singles meet up at Marigold to shoot the shizz, drop 20 bones on a four-course meal with wine pairings and hopefully get some play. That's what it all boils down to in the end, right?

Get Crazy: Devon Avenue
Loaded with glorious buffets, Devon Avenue is the poor man's home to good grub on a dime.