Home Archives Profile Subscribe
It's all about the Waterline...
Goin' back to Mexico--just 3 more days~ 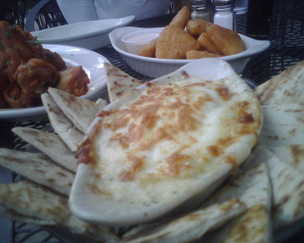 According to the bill, we'd consumed 16 mojitos this time around. I wondered, how is that even possible, with three wee gals and a time span of just a few hours? I blame it on the setting sun, no days off work in weeks and an appetite for the good stuff.

The night started out innocent enough. I was meeting a few pals at Morseland just down the street from my place for a simple mojito. Though I'd never been to this popular haunt, I wanted to scope out my friend Lisa's new 'hood on Morse Avenue and try a new place. Morseland's reputation for killer mojitos was the clincher.

Lisa and I met up just before sunset and grabbed one of the comfy tables outside. There's nothing like eating al fresco in Chicago, especially on one of the adorable side streets in a cute neighborhood like this part of Rogers Park. We ordered up a round of drinks stat, extra ice for me.

Though the waitress confirmed that Morseland made its mojitos the traditional way—with crushed ice instead of plain old cubes—we had no such luck. Whatever. With the mint, sugar and lime mixture pulped to perfection, our first round went down in less than two minutes. Lizzie showed up after our couple of drinks, quickly grabbed Lisa's and downed it.

Attacking the appetizer side of the menu, we ordered a round of wings, baked artichoke and shrimp dip with pita bread and one of the most horrifyingly delicious things I've ever popped into my mouth: beer-battered macaroni and cheese fritters served with a side of cumin and chipotle salsa. While Lizzie gnawed the barbecue chicken wings to the dirty bone and Lisa dug for fat tiger shrimp in a bed of gooey artichoke dip, I dissected a slew of the searing hot cheese fritters.

I wondered aloud, "How is it possible that the chefs make such perfect little packages every time?" Lisa swore up and down they had to be frozen, but I was pretty skeptical. Morseland doesn't seem like the kind of place to pull the old frozen, mass-produced appetizer dance. Not when they put such care put into each minty mojito.

While we slurped down round four of our beloved mojitos and polished off the last of the celery sticks and blue cheese/ranch mix, I caught a whirl of bright blue curls out of the corner of my eye. They happened to belong to an old friend of ours, Michelle, who we hadn't seen in years. Of course, noticing the mojitos, she promptly plopped down, ordered up another round and proceeded to fill us in on her big-time obsession with soccer. What a small world, I thought as we laughed our way through another round of ice-packed cocktails. For hours, we relived the hellish movie-making experiences we'd all survived together back in the day, occasionally interrupting our reminiscing with giddy fits about Beckham. I'll toast another mojito to that one any day…once I get over this memory-thief of a hangover.

The Final Rave: Usually, I love caipirinhas but I have to say, the one at Morseland is strong as an ox. Stick with the mojito all the way around.

Eat It: Uncommon Ground
Now that this wonderful restaurant is opening doors on the North Side (Devon), I will be one step closer to mac 'n' cheese overdoses. Its version, topped with tomato chutney, is a classic.

Drink It: La Taberna Tapatia
This tiny Mexican joint on Ashland has a totally smoking mojito, and its back patio is perfect for enjoying a half-dozen of them.

Slurp It: Ba Le French Bakery & Restaurant
This Vietnamese storefront has the best crushed ice machine in the city, not to mention unbeatable Thai iced tea.

Get Crazy With It: Miami
Tickets are always budget-friendly, the beaches are lovely and the Little Havana 'hood doles out cheap mojitos at all hours. Why not drop in for one?