Home Archives Profile Subscribe
The Fish Keg = Fried Nirvana {From The Raving Dish}
I'm a Map Nut (And Book, and Boat, and Travel, and Pilates...) 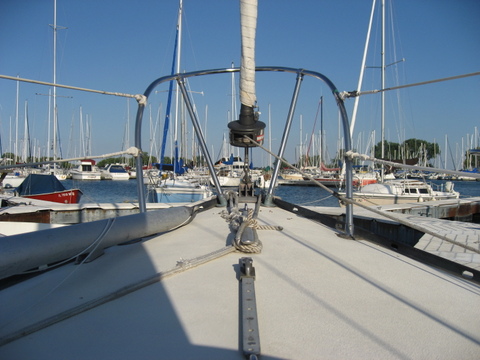 Sometimes you just take the plunge. There are no warnings, no signs and, in the end, no doubts. For me, all it took was a plain sheet of white notebook paper posted on a phone pole in California, painted with an image of a small sailboat and the words "For sale." Before I knew it, I'd bought a 25-foot sailboat on eBay and found myself driving into the remotest corners of Baja to learn how to sail it. Alone.

That typical Misty adventure happened back in 2004, and I've since sold that boat and forgotten everything I learned about sailing. Still, the backdrop of Lake Michigan dotted with bobbing sails never let me truly ditch my jones. So, after seeing a 30-foot C & C for sale in town, I once again took the plunge. At least this time it was in my own back yard.

The skinny: Sailboats conjure up the most romantic visions: Extreme adventure, new discoveries and no one to answer to ever again. In reality, though, steering the thousands of pounds of fiberglass and steel requires serious skill. There is no just winging it. I had loads of questions from the get-go: What if the boat flips? How do you start the engine? And most importantly, can I rename the boat without a freakin' ceremony, or is that just a tall tale?

The getup: In Chicago, it's all about flip-flops and foul weather gear. You can jovially cruising along and BAM! The heavens open up and a sheet of fury pours out on your unsuspecting self. In other words, keep a rain jacket and marine shoes handy.

The payoff: As effortless as sailing appears from the harbor view, life onboard is a different story. There are sails to hoist, lines to pull in and booms to dodge. Most of the load lands on your biceps, but don't forget about your poor gut. You'll know what I mean once you've slammed back a half-dozen cuba libres at the yacht club with a roomful of saucy sailors and then, in one last stab against the "man," inhaled a giant plate of onion rings dipped in ranch.

Wear and tear: I hired a private instructor to show me the ropes on my own boat, and thank god I did. The morning I took my boat "off the hard," we weren't halfway to my destination before the engine died. Just my luck, not a lick of wind crossed the Windy City air, but my nifty captain knew all we could do was hoist the sails and try like hell to catch a breeze. Eventually, we picked up speed and made for Montrose, but without his expertise, I'd probably still be gazing at the city skyline.

The commitment: I'm all about single-handing (me and the boat) by the end of the season, but in the meantime, I just want to be able to take my pals out on a glorious Saturday afternoon. It only takes a few classes to heroically tack, jibe, steer in and out of the harbor and live and breathe the points of sailing to the tune of sheer exhaustion.

The cost: A sturdy small boat costs anywhere from 2k-20k, and I don't even want to know how much I've poured out in marina charges, mechanics costs and gizmos galore. For freebies though, head into any Chicago marina on a Wednesday night and chat it up with a captain coming in from racing. They're always on the hunt for fresh meat to crew their boat. Or, Chicago Sailing offers a three-hour Intro to Sailing class every Tuesday for $95.

Difficulty level: Don't expect all beer cans and suntans. Sailing requires a lot of mind/body coordination, wind reading and mechanical understanding, and when you combine those abilities with the wild desire propelling you to ditch life as you know it and cruise on down to the Caribbean, you've got some pretty sleepless nights on the horizon.

The verdict: No cooler set of skills exists on earth. Think about it, once you've mastered the art of sailing, you can travel around the world via Mother Earth's windy temperament and leave barely a footprint. You know, hit up exotic ports, snorkel 'til you're one huge wrinkle and watch beautiful sunsets from your own cozy cockpit with a sundowner in hand.

She is a nice looking boat...what made you decide to take the plunge and become a boat owner? I have sailed since I was young and contemplating buying a boat but haven't got up the nerve to pull the trigger (argh!). Any advice?? Thanks