Home Archives Profile Subscribe
Whoever Said Fire and Rum Don't Mix?
So You Wanna Be a Sailor?? {From CS}

The Fish Keg = Fried Nirvana {From The Raving Dish} 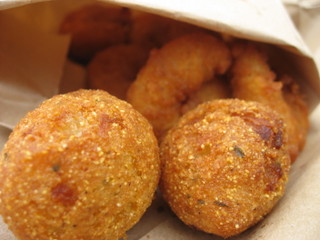 I could tell by the quizzical stares I was getting that all the folks wandering into The Fish Keg thought I was crazy. Here I was, a wide-eyed gal dressed in Pilates wear, spreading hot-out-of-the-fryer food onto the hood of my dusty black truck.

To them, I was a loon. To me, though, I was just trying to set the perfect food shot in the correct amount of light. It if means maniacally rearranging a piece of crispy fried shrimp or a golf ball-size hush puppy barely a smidge, well, it's all worth it for the sake of snapping the very best picture. And, thankfully, after a brief photo shoot, I'd captured my goodies to my liking and the time had come to dig in.

I ended up at The Fish Keg by accident. I found myself with a free day since I wised up and hired a sweet little Polish gal to clean my place. After realizing that I had an entire day to myself, I felt lost and unsure of how to spend the day. Movie? Bike ride? Shopping? Of course it all turned back to food. I just did what I do best and started cruising the streets looking for some inspiration. I found it on Howard.

The heart-pounding words "famous for breaded fried shrimp" caught my discerning eye, and before I knew it, my cafe con leche-filled belly demanded a pit stop. Though I'd roared past this tiny brick storefront dozens of times, I had only thought about plowing through the doors for an order of anything fried. Well, now the time had come to give her a chance.

The interior was spick and span, part-grocery and part-take-away counter, the glass cases and shelves packed with fresh fish and various accoutrements to enhance the fried seafood meal: hot sauce, coleslaw, pasta salad, tartar sauce, cocktail sauce, brownies, etc…Taking a look at the menu, I decided on the raved-about shrimp and a handful of hushpuppies.

While the cook dropped my goods in the fryer, I manhandled the thick, dark chocolate brownies on the countertop and picked out the perfect ramekin of creamy coleslaw. A few minutes later, I received my paper bag full of lunch and practically skipped out the door toward my truck. After finishing up my "photo shoot," I climbed in, eased my driver's seat back to a more comfortable position and chowed down.

Let me just tell you, I gazed at a brick wall for 10 minutes, totally content, while I chomped on the best fried food I've had in the city. I double dipped the shrimp into the homemade tartar and zingy cocktail sauces while stuffing tiny hushpuppies into my mouth like they were jellybeans. The clincher was the mayonnaise-heavy cole slaw. Being from the South, I know deep in my bones that cole slaw just ain't cole slaw without hint of sugar, and the bites I took out of this tiny plastic cup battled my mom's for the best ever.

Waves of sadness overcame me when I realized that I only had one little bitty shrimp and half a hushpuppy left. I stared at them both for what felt like eternity (.02 seconds) and popped them in my mouth with utter delight. Who knew a girl could be so happy, dead alone, perched in a cozy truck in a random parking lot with not a sound to be heard except for the crunching in my mouth? Was it all a dream? Nah! I still have the lightly greased paper bag in my truck (and a houseful of clean ceiling fan blades) to prove really happened.

The Final Rave: I ordered a quarter-pound of fried shrimp thinking it would be enough. Make like a pro and go for at least a half-pound. Trust me, you'll want more.

Eat It: Mr. Shrimp
The masses claim that this joint has the best fried shrimp in town. Maybe, but you won't see me hauling to 63rd. St. when Howard sits just a few blocks away?

Drink It: Uncommon Ground
This adorable haunt is said to be opening up a sister restaurant in the old Speakeasy Supper Club space on Devon. What's that got to do with shrimp? Nothing! I just love their bloody marys.

Do It: Hushpuppies Recipe
You won't find better way to spend an evening at home than making batch after batch of glorious, crispy hushpuppies.

Get Crazy With It: Mississippi Delta
Man, what a great road trip that would be right about now. Starry nights, tent camping, fried shrimp and paper sacks full of hush puppies. Nice.