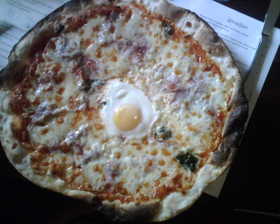 There comes a time in a woman's life when pizza is the only thing that'll do. Not Mexican. Not Asian. And God forbid any Indian show face. No, it's only pizza that my soul is lamenting over, and it's certainly not that gooey, Chicago-style pizza that everyone loves to rave about (and that which also graces the cover of the October issue of Saveur). My belly cries only for the delicate Italian job of a super-thin crust, splashed with a few light ingredients and then quickly blistered in a wood-burning oven (preferably one I can see from the dining room). Seems the city has become populated with restaurants that serve up pizza just like this, but I find Il Fiasco's version to be unfailing (re: not soggy one day, crisp the next).

The first time I dropped in to the smooth Italian spot in Andersonville, I found a few things about the place that weren't to my liking. What kind of Italian place has Sheryl Crow videos playing in a constant (and loud) loop on a suspended TV? Instead, why not offer some simple background music to go with the lovely pinot grigio that comes served in a small carafe (very European of them)? Every time a new Sheryl video popped on, I found myself uncomfortably turning around in my booth to see what hairstyle she was sporting this time. (Don't blame me for my morbid fascination; I had just never seen her videos before). I'm also not a fan of all dark wood in a restaurant, as it looks so sports bar-like. And, if you're going to spend the money on bread for every table, you might as well take a minute to heat it up; what a difference that would make!

But, on to what I love about this joint. After slowly absorbing half my vino on my latest trip, I was just blissed-out enough to go a little off-base and skip my usual favorite, the margarita pizza (primarily cheese, basil and red sauce). Instead, I went with the Fiorenta, a little ham-, garlic- and spinach-covered diddy topped with a perfect fried egg. Nothing more, nothing less. There was something about the idea of ham, egg and garlic that sounded oh-so-right together. I listened in on a conversation at a neighboring table (apparently, the couple was not too pleased with the contractors working on their new place), and soon my friendly-as-a-puppy-dog waiter bolted out of the kitchen with a bubbling mess of chewy goodness.

Before ripping into the dish, I sat and gazed at the perfectly cooked egg for what seemed like eons. Never one to use a fork on pizza, I tenderly tore off chunks of the crusty dough, gently trying to work my way around the huge slabs of ham that seemed to be buried under all the other ingredients. No such luck. Eventually, I gave up on civility and took a stab at pure cavemanship: I ripped a chunk dough (with wilted spinach clinging on for dear life), slung on top a piece of steaming-hot ham and dunked the entire handful into the yellow of the egg. And so went the dreamy process over and over again, until I was out of wine and stuffed to capacity. Upon looking at my disaster-ridden table, I discovered I had barely made a dent in the pizza; what a fantastic realization! Late-night snacks all the way around.

Now, if I could just get away from Sheryl. Ever seen one of her videos? Her mouth is so bizarre and sick; it's such a joy to watch it unleash a silly song. And, man, I could go on forever about her wild hairstyles. Poor thing.

The Final Rave: I was truly stunned that I ended up dropping almost $30 for pizza and some vine. Is $11 per pinot grigio really the only way to get a glass? Ah, but that pizza. That delicious pizza will keep me coming back.

Eat it: Gruppo Di Amici
Unlike Il Fiasco, here you can watch your mass of dough become flawlessly baked if you so choose, since the fiery oven is out in the open. I always ask for extra basil on my margarita.

Drink it: Frasca Pizzeria & Wine Bar
Though folks knock it for its mainstream vibe, I love its flights of vino. You get four different glasses, all a quarter full of wine. I say it's brilliant, and I love the pizza, too.

Do it: Spacca Napoli I still adore this charming outpost along Ravenswood. To me, it really started the thin-crust trend, and to this day, it remains as chill and consistent as ever.

Get crazy with it: Naples Winter is on the way, and I'm sure tickets to tourist-welcoming Italy can be had for a song. Naples is the place to be for cheap, delicious pizza. Of course, once you've had your fill, you can beat it out of the gritty city and head to the stunning Amalfi Coast.