Home Archives Profile Subscribe
One More Surgery in Indo Complete
Yah, But the Indonesian's Do Smile** 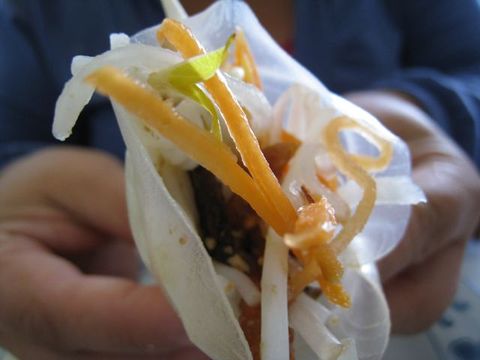 You'd think that after 30 days of eating nothing but rice in the Indonesian highlands, I'd be a wee bit sick of the little white bullet. Not so. I was no sooner back from a month of Indo bliss (think: volcano trekking, scuba diving and back roads-exploring) than I was jonesing big for rice, rice and more rice. I'd just posted something about Vietnamese food on my foodie/adventure blog, bigsweettooth.com, when a bud of mine laid out some details about his favorite Vietnamese place in the comments section (thanks, Wade!). I happily tucked his nugget of intel into my secret bag of goodies and one afternoon, while cruising around Albany Park and craving something exotic, I remembered Hoanh Long. I cut north on Lincoln Avenue; it was game on.

Once Lisa, my always-up-for-anything eating crony, and I rolled through the front door with a sack full of Tsing Tao, it was clear we were stepping into something golden. Not because of the decor (specials of the day were taped haphazardly on the wall) and certainly not due to the crowd (there was only one other patron in the place), but simply because the vibe was just downright homey. And, for such a funky stretch of Peterson Avenue, it was a shining star in the tangle of name-brand stores. We instantly felt a sense of calm once we sat down. 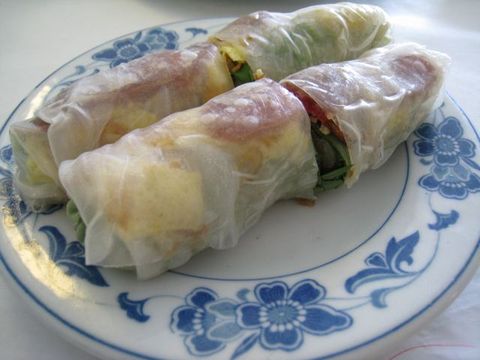 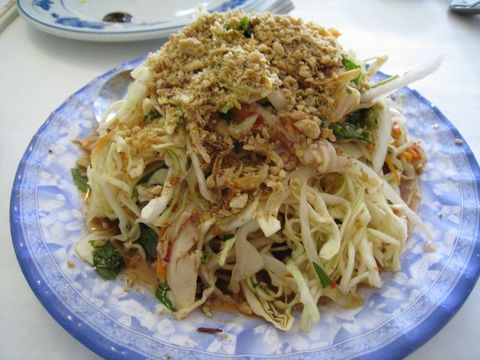 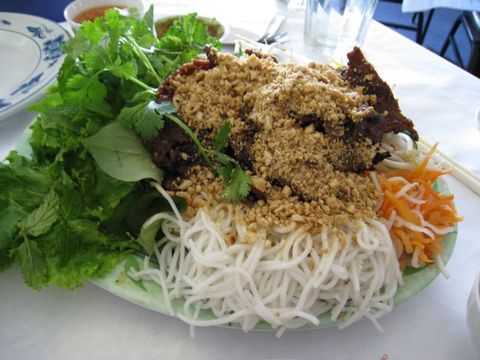 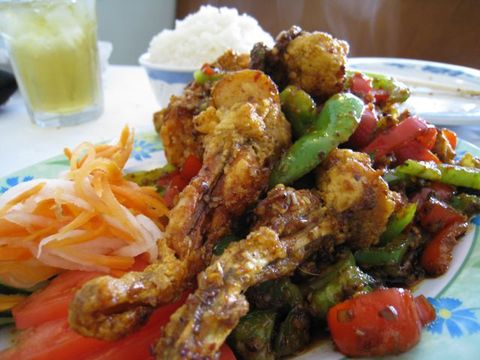 Everything service-wise moved at a slow-as-molasses pace, from the bottle opener being brought over to the table, to the wrangling up of a couple of limes to complete our sassy beer concoctions. Ah, no matter. Lisa and I were too busy ripping apart the menu: Did we want the vibrant shredded chicken salad (goi ga) or would we rather tuck into an intriguing platter of fried frog legs with butter (ech chien bo)? Would we care for soft Chinese sausage rolls (bo bia) or would we prefer to inhale some grilled beef wraps (thit nuong rau song)? In the end, our bellies won and we chose them all. When the heck do you get to order fried frog legs, come on!

First up, and after a couple celebratory beers each, we laid eyes on a pair of just-cooked sausage rolls. The fried egg stuffed into each soft packet was still warm as we dunked them into the accompanying sweet plum-like sauce, and just as we polished them off like jalapeno poppers, the waitress went gangbusters.

Our table nearly sagged from the weight of the chicken salad and the feast that is thit nuong rau song. While we waited on our sheets of rice paper to soften in a warm bowl of water, we chopsticked up bits of tender chicken and incredibly tangy raw veggies.

I'd be attacking some shavings of jicama, while Lis expertly wrapped fingernail-thin chunks of grilled beef into little bundles. We'd switch plates and I'd scoop up some vermicelli noodles, giant leaves of mint and basil, and bits of sweet meat and plop them straight into my rice paper. Somehow my roll resembled a messy soft taco, not a tidy packet, but who cares. I'd just dip each handful into the fish sauce and double-fist it with a slug of cold beer.

When our gal trudged out with our frog legs, we were utterly stuffed. Glancing at each other, we just shrugged and took a small nibble of the chicken-wing-looking frog leg. Cut to a plate of bones in five minutes flat. Poor frogs, they probably didn't deserve a lashing like that. First of all, who knew their legs were so long and meat-packed and second of all, who knew they tasted so dang good? I almost forgot I had rice to contend with in the final moments of our shove down, but that's what takeaway is for, no?

THE FINAL RAVE: I hate to say it, but unless I can't make it all the way over to North Lincoln for some crazy reason, Sheridan & Argyle will never see the likes of me again!

DRINK IT: Ca Phe Sua Da
It's just Vietnamese iced coffee, but it's nothing short of bliss for the 'buds.

EAT IT: Campeche
After spending some time in Campeche earlier this year, I know the city has great food, so this small Mexican restaurant next door to Hoanh Long is next up in my bag of goodies.

DO IT: Take the side streets
God, what if I never strayed from the big dogs—Ashland, Western, Sheridan or Elston? The side streets of Chi have some mega-watt winners when it comes to regional food, and I guess if you stray long enough on Lincoln, you'll hit the jackpot.

GET CRAZY WITH IT: Indonesia
If anyone is interested in going to Indo, hit me up. I can put together a trip for you that will make you wonder what the heck you are doing living in this beautiful mess of a country. For real.

There is nothing like Vietnamese food...I am here salivating and wanting, wanting, wanting to eat those spring rolls...can you overnight some to Canada? My friend and I tried making some here at home and they were okay...but certainly not the real deal...I will email you a picture of our sorry, pathetic attempt.
XXOO g&t&cg