Home Archives Profile Subscribe
The Boat Name--Change of Plans...
Santino's on the West Side of LA = The Perfect Little Bar

Pozole Perfection {From The Raving Dish} 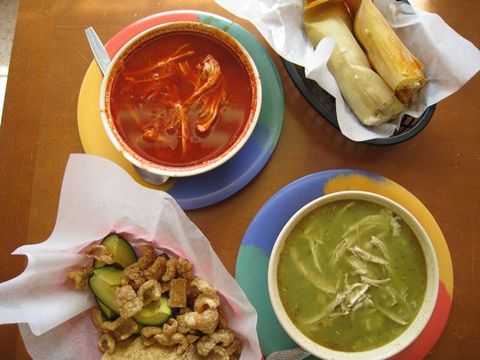 A mere six months ago, I was in sun-kissed Mexico and I couldn't sleep. It wasn't because I wasn't tired; oh no, I was dead exhausted. It was stroking in on 5 a.m. and I was wide awake because I'd been on the beach drinking rum since sunset. The time had come to either satisfy the voracious munchies or to cut my losses and hit the hay. I chose to eat. But what could I possibly find on a tiny tropical island off the coast of the Yucatan Peninsula before sunup on a Sunday morning? I woke my pal Lisa up from her deep, unsuspecting slumber and we decided to find out.

We drove a dozen crazy loops around the five-mile-long island, and finally stumbled across a 24-hour market. We succumbed to an old stand-by: a can of cheese Pringles. We were almost back to our hotel when I remembered a two-table restaurant that I'd eaten at earlier in the week. I'd noticed a hand-scratched sign that simply read, "Pozole Sunday Only." On the off chance that some nana would be slinging up some hominy stew before the crack of dawn, Lisa and I plowed by in my truck (yes, I'd driven to Mexico from Chicago) and were met with a glorious sight to behold. A bona-fide grandma was standing in a scrap of a kitchen lovingly stirring up a cauldron of homemade pozole; it was game on. Nothing like island spice to settle a Cuban rum-filled belly. 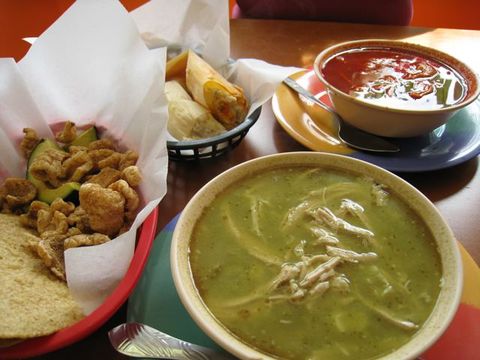 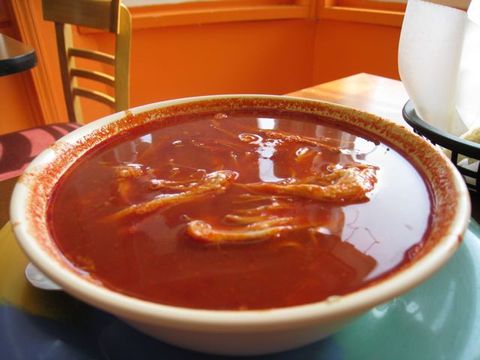 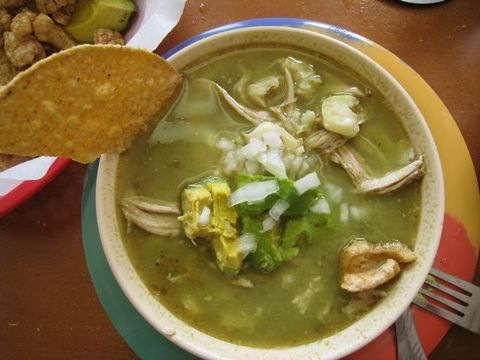 Since that 7 a.m. bowl of downright alarming soup--dressed with diced onions, crackles of chicharrones (fried pork rinds), velvety avocado, shredded lettuce and fresh lime—I've never come across any sort of pozole offerings that sounded authentic. Until I woke up in the same sort of dilemma one Saturday morning and remembered a similar sign dotting the front window of Tamales Lo Mejor de Guerrero: "Pozole Weekends Only." Time for a rematch, Chicago-style.

Red or green, you can't go wrong with pozole. Tamales is the kind of place that just makes you happy. It's clean and bright. The tangle of women shrieking with laughter in the back turn out pot after pot of steaming tamales to addicted regulars. And, on the weekend, they serve big sloshy bowls of pozole for those on the hunt for Mexican comfort food. Each bowl houses close to a half-gallon of traditionally spiced liquid (I dig the red, but Lisa loves the green) topped with shreds of meat and blistered with huge pellets of fresh hominy (most definitely not the hominy from a can you remember from your youth). The clincher is the piles of side treats that comes out with each bowl, each one a literal shout-out to your taste buds. You have the requisite chicharrones, the slivers of avocado, the diced onion, the juicy lime and crispy tortillas to dunk into the concoction. Dress up your soup, top it with a bit of crushed oregano and talk about a trip down all my Mexican memory lanes.

This brilliant bowl of ruby-red soup is what mornings-after were made for; after all, millions of Mexicans can't be wrong, right?

THE FINAL RAVE: If you don't want to brave the throngs of tamale lovers that sometimes pack the small storefront, stop by the handy tamale cart a few blocks south on Clark. They're just as fresh and just as cheap.

DO IT: Make pozole at home
This is the perfect soup for fall, and it's simplified by using hominy in a can. Thank god Mexican food (and beer) never goes out of season.

DRINK IT: Dos Equis
This Mexican beer is the best thing I can imagine to wash down all that pozole love. Serve almost frozen with a large hunk of fresh lime.

EAT IT: Pozoleria San Juan
I've only heard rumbles of how good the pozole is at this pozoleria, but you can bet the moment I get back to Chicago, I'm checking it out. How could pozole at a "pozoleria" be bad?

GET CRAZY WITH IT: PURE Pilates Retreat The Pilates retreat I produce every year down on Isla Mujeres has one room left; it's a perfect January 2009 Chicago escape. Think pilates, scuba diving, snorkeling, volunteering, cooking workshops and a foodie tour of the island. Guess where pit stop number one is on the foodie tour? Hello, my old friend Mr. Pozole.

Thanks for naming Manolotis.Love Pozole! Will check it out next visit.

I know exactly the one you are talking about! Wonder why I never noticed it? BTW, Mango Cafe has still not opened for business. Too bad. I love the "Drive Thru" window!

Hey Wayne, do you know Loncheria Manolotis? It's over by the new Mango Cafe, just down the road from Casa Ixchel. Let me know if you swing by....you will love the Sunday AM pozole.

Also, I know what you mean about the word ENOLA. But, man I can't get past ALONE. It's too rich for me to give up on it!

Pozole is perhaps my favorite Mexican dish. Red or green, don't care for the white too much. So do tell and tell me quickly, where was this Sunday Pozole place? I'll have my ass at that table this Sunday for sure!

You are killing me with this one! Pozole is my favorite soup on the planet. If we ever make it back to Isla, I'll be on the hunt for l'abuela pozole.