Quick MST Update - All Kinds of Stuff on the Happs... 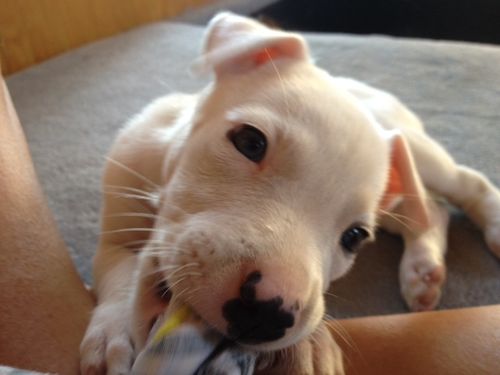 Welp, I always said when I finished my Jerseylicious run, I'd get back to the true MST life.  What is the true MST life, you might wonder?  Well, if you've been a toothie for any amount of time - you know my history.   It's a simple way of life.

Let me give you the basics - it's chock full of boating adventures, solar trailer escapades in Mexico, an NGO in Indonesia and mass amounts of solo travel.  I just never expected the TV show to go that long, so I stumbled.  And, put it all on hold.  And, to be frank - sometimes I straight up forgot I was that chick.

The one who bought her first sailboat on ebay.  The one who bought a 14' tin can trailer online and pimped it out myself and took it to Mexico where I drank unreal levels of cerveza and tried to learn Spanish.  The one who volunteered in Indo and then just started my own NGO cause it seemed like the right thing to do.  The one who made up a show about her eating and traveling and sold it to Travel Channel.  The one who was free (even when she wasn't).  Well - I'm about to get it all back.

Been done for 1 whole week as of today and managed to get a few life things in order.  1st up - went and got myself a puppy!  Little Minka (Minx for shortie) is a pit/Mexican mutt mix that is the most curious/adorable/funny/cozy creature ever.  Ever since I met the original Mexican mutt Cowgirl (you know who you are) in Mexico a long time ago (trailer park in San Miguel de Allende), I knew I'd have a little mutt.  And, I'd take her to Mex to learn Spanish.  And, she'd live a life other doggies would be jealous of.

Next up - moved all the madness off the FLOBO today - cause that little remodeling project is gonna start up next week.  Like I said, I've way, way scaled back and cause I'm just not wanting to work like the madwoman I just was - so, it's gonna be a simple little homebase in LA for my entertainment pursuits.  Simple as that. Long time coming and it should fly by.

Then - I literally just found the Airstream I've been looking for, but it's rarely avail.  It's a 2010 23D that is just simply awesome.  Thing is - I was thinking about an older one that I revamp, but I just cant take on another project.  If all you have going is projects, then where the F is life?  So - I wanted it done and done - tricked and tricked.  Expense over and life onward.    Going next week to grab it and toss it in a lot til this next little (wee little) job I do is over and I can pop it on the back of my truck and winter in Mex. Write some more.  Explore again.  Not live by emails and texts and internet.  It's truly the BANE.

Which brings me to my sailboat.  All those electronic projects are slowing going to be winding down, a new ignition installed (please be the reason the engine don't start) and one more quick Fall varnish job.  Will look amazing and run amazing. 3 years in the making...

So - you got the Floating home, the sailboat, the airstream and the puppy - all in different stages of wonder than they were a week ago.  WHICH IS BLOODY AWESOME.

Time to walk Minx and get back to my plotting and planning - schemin' and dreamin'. Remember I used to write on The Tooth DAILY.  I mean - religiously.  And, I loved it.  I don't want things I love to become a hassle cause I'm too busy making a TV show about literally NOTHING.  That's just ignorant.

Oh, the places I find myself... 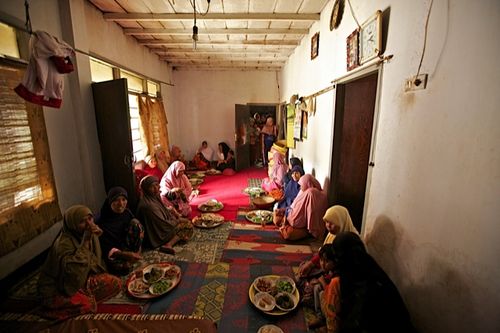 I'd be crazy not to get involved...

They are Muslim and covered head to toe.  But, they're just like us in the end.  Just wanting to gossip all the live long day amongst their pals and shove down sweets for hours and hours.  Laugh, cackle, eat, sip sweet tea, poke fun at each other.  Those are girls.  You put a room full of them together and you will always get the same posse of could-be fatties on the make.

I don't know much Indonesian, so Sasak is even further out of reach.  But, we share giggles and bites of sweets for a few minutes.  They scream the English name of something to me over and over - as if it will make the Sasak version stick into my skull.  But, unless its Spanish, it's in one ear and out the other.

Who needs words though - when food and smiles are God's currency?  They adore me cause I've helped their kids and neighbors kids all learn English.  I've helped their little community as much as I can - water towers, homemade garbage cans, community development centers, cleft palate surgeries.  FREE English classes.  Tools.  Volunteers and a thriving volunteer program.  Comupters.  Cameras.  Clothes. A beloved guitar played by all (expertly, I might add).

Who am I to care?  Why even start 4th World Love?  Hell, WHY NOT?  It ain't no biggie and it makes me proud.  It brings me joy when sometimes there ain't none.  I watch people learn and LOVE IT.  I make a difference.  Again, WHY NOT?

And, I guess all these funny little folk in Lombok make me laugh and laugh.  Of course I'm gonna help.  It's just my nature...and it's sooooo easy to do.  'Nuff said.

Next Level Eggs Found in Bali 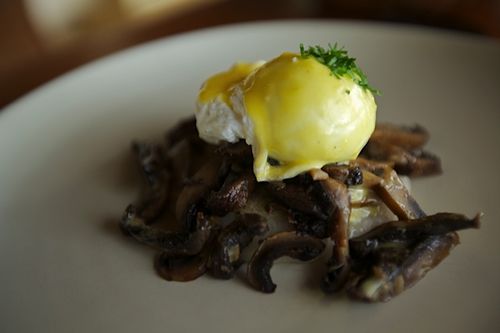 I eat them any which way they come - hard/soft boiled, scrambled, over easy, omelette, poached, chopped in egg salad with a boatload of mayo, for breakfast/lunch/dinner/snack - any way at all.  They are just the best food in the world for a vegetarian.

That all said, the best I might have ever had for breakfast is at Alila in Bali.  It's a small but filling portion of egg gold.  Imagine a Balinese crumpet topped with sauteed mushrooms, 1 simple poached egg and a drizzle of lemongrass butter sauce.  Dear LORD.  Talk about a taste sensation.

The chef was kind enough to note my obsession and tossed me the super easy recipe as I was checking out.  Good news - the crumpet is made with rice flour and the butter sauce is a piece of cake to whip up.

I haven't had a minute to try and make it yet - but once I do, I'll post the recipe cause this is some insane dish.