Roaming Vendors All Over Bali--Cheap and Tasty 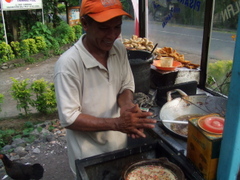 Every where you look in Bali, there are tiny, one-man carts set up that dole out quick bites to eat.  At the end of my first week on the island, I had made my way from the bustling mountain village of Ubud to the tiny coastal village of Candidasa and I'd still not tried a single dish from any of these vendors (they are called kaki-lima--which literally means 5-legs)...mostly due to the fact that many of them dole out meat based dishes and I'm off the meat right now.  But, while I was trekking along the main (only) street in Candidasa, I noticed this sweet fella frying up all sorts of goodies in a huge vat of oil and had to take a sample of what he was making--turns out, it was one of the most memorable and utterly delicious things I tasted while in Bali.  I had slightly sweet fried tempeh (thin as a saltine), deep fried banana fritters and this little pancake packed with honey that had me totally moaning.  Everything was so good, I ate it on the spot and had to order a whole new round.  The mini-feast set me back about 4000 rupiah (the Indonesian dollar)--which is about 40 cents.  Thank God I sampled his fare--if you ever make it to Candidasa, he is perched daily at the bottom of the hill that leads up to Tenganan, a totally traditional Balinese village.  You can't miss him--he's got a long line of hungry locals waiting to slam down his tasty food~ 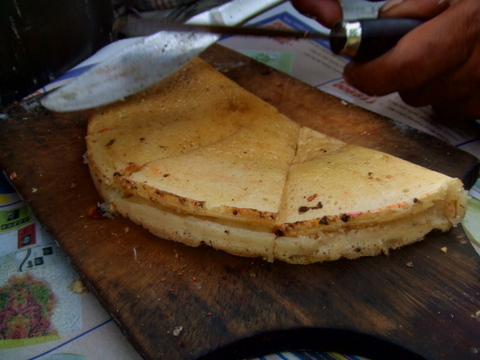